The importance of heirloom seeds 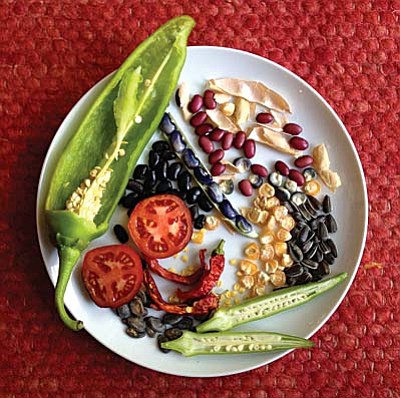 How many lessons we can learn from the back of a seed packet! I used a packet of "Cherry Belle" radish seeds with a group of elementary school teachers to introduce lessons aligned to a range of subjects that they could teach their students from information found there. The object of this staff training was to inspire teachers to use the school garden as an outdoor classroom.

On the back of the packet it described this radish as a "Delicious Heirloom." One of the teachers asked, "What does it mean, 'Delicious Heirloom'?" I answered by asking, "Who knows what an heirloom seed is?" One teacher offered, "We have an heirloom china cabinet in our dining room." I then asked what he meant, and he replied that the cabinet had belonged to his great-grandmother and had been passed down to him.

Heirloom seeds are seeds that have been handed down from one generation to the next. They are seeds that are the storehouse of family traditions and stories of family struggles and celebrations. They often have colorful names like "Mortgage Lifter," "Nebraska Wedding," and "Mamie Brown's," all referring to tomatoes. Many seeds traveled to the U.S. in the baggage of immigrants, and connected them to the homes they had abandoned and the foods they had eaten.

Seeds were also the storehouse of our agricultural biodiversity and heritage. I say "were," because since the 1900s, some seventy-five percent of plant genetic diversity has been lost as farmers worldwide no longer save their multiple local varieties and uniquely adapted seeds, opting instead for genetically uniform commercialized varieties. The result is a less diverse modern diet.

Seed saving was common until the advent of industrial agriculture after World War II, when the technology and materials of war were turned to agriculture, and chemical companies became seed companies. This change has reached a tipping point as we face consequences of multi-national corporations that would control the world food supply, putting the survival of soil, water, plant diversity, pollinators, animals, and ultimately, our health and food security at risk.

I often get questions about seeds so here is a summary that perhaps will clarify the types of seeds available:

Heirloom seeds must be self- or open-pollinated. These include varieties used by Native Americans and passed down and shared with us via seed banks and seed saving organizations such as Native Seed Search in Tucson.

Gardening in our area is a real challenge. It is encouraging to meet and learn from other gardeners about their challenges and successes. To help you do that, Gardens for Humanity is offering monthly workshops on the second weekend of each month, which will take place the weekend of October 11 and 12.

On Saturday, October 11, our Greening Harmony gardeners will present the Fall Garden Teaching Tour from 1-4 pm. On Sunday the 12th we will present a workshop on Saving Seeds.