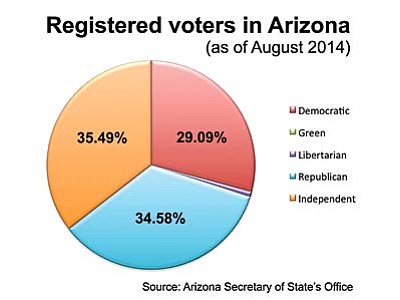 A breakdown of registered voters in Arizona. (Cronkite News Graphic by Rachel Lund)

PHOENIX - As an independent voter, Ariel Motz said she understands the importance of her vote and is proud to be part of the state's largest voting bloc. But she said the current election system is stifling the voices of independent voters, starting with the way Arizona handles primaries.

As an independent, Motz has to choose a party's ballot to vote in the primary. Because she votes early, she has to decide each election which ballot the Maricopa County Elections Department mails her.

This year she requested a Democratic ballot because she finds herself more aligned with that party's views. But she's frustrated knowing that in a state dominated by Republicans that party's primary will for all intents and purposes decide some races.

"It's not just being categorized. It's being forced to pick from either this option or that option when neither option really represents my political views," Motz said. "It's a system that just makes the Republicans or Democrats the more dominant party."

Because of these and other reasons, the state's single largest bloc of voters - 35.49 percent of the total - may be forfeiting their ability to make a difference in Arizona elections. According to the Secretary of State's Office, about 12 percent of independents voted in the Aug. 26 primary compared to 27 percent turnout among all voters.

The struggle of the independent voter is not just idealistic but logistic. Arizona has what some call a semi-closed election, meaning independents can vote in primaries but must choose the ballot of one political party.

Another challenge for the independent voter is that counties are only required by law to notify independents once about their right to vote early, the process for requesting an early ballot and declaring which party's primary they will vote in.

Joe Garcia, director of communications for Arizona State University's Morrison Institute for Public Policy, said he believes the biggest problem is a lack of voter education, especially among independent voters.

"Even people who see themselves as well engaged - they don't know they can vote (in the primary)," he said.

Garcia said that low voter turnout is also a symptom of a broken system.

"There is a certain fatigue - we have gridlocked politics so much that people have lost faith in what government can and can't do," Garcia said. "In some ways people vote by not casting a ballot. But it is going to take people voting to change anything. It's just a conundrum wrapped inside an enigma."

Robert Graham, chairman of the Arizona Republican Party, told the Arizona Capitol Times recently that he plans to form a committee to study the effect of possibly closing the party's primary to independent voters, noting that many conservative GOP members argue that allowing independents to participate weakens the party's platform.

If Ariel Motz had her way the two-party system would be completely done away with. But said she would settle for an open election similar to one Arizona voters defeated in a 2012 ballot measure.

Proposition 121 dubbed the Open Elections/Open Government Act, would have replaced the current partisan primary system with a single primary that advances the top vote-getters regardless of party.

"I don't believe independents can make a difference in the primaries with the closed elections," Motz said.

Terry Goddard, Democratic nominee for secretary of state, said he supports a so-called top-two primary because he sees it working in every city in Arizona.

"The winner-take-all primary is not an empowering process, especially for independents," Goddard said. "I personally believe that if they would vote, they would make the difference. We have to give them the opportunity to be engaged."

Michele Reagan, the Republican candidate for secretary of state, said she is open to any option that would increase voter turnout but stopped short of endorsing a top-two system. She said small changes should be made within the system.

"I think we would see a huge increase in independent voter participation if they automatically received their ballots just like Republicans do," she said. "I would like to see a change to where you could say as an independent, 'I'm on the permanent early voting list and I want a ballot every time and I always want to get a Republican ballot, every time until I request differently.'"

Paul Johnson, the former Phoenix mayor who helped lead the push for Proposition 121, said there is more to the problem than independents having to request ballots each election. To him, the major parties know they are losing ground and don't want to see their power slip away.

"This is intentional voter suppression meant to keep those voters away from the polls," he said.

"All across the country people are leaving both parties and registering as independents, and they are doing that through no organized efforts, unlike both parties that have efforts to increase voter registration but they are losing ground," Johnson said.

"We are coming back with an initiative that removes party labels. We are going to make it a nonpartisan election system that is exactly like the one the city government has," he said.

EDITOR'S NOTE: Sources in the Public Insight Network informed the reporting in this story through a partnership with the Cronkite PIN Bureau.