Shakespeare on Main, y'all: Laark Productions presents Much Ado About Nothing 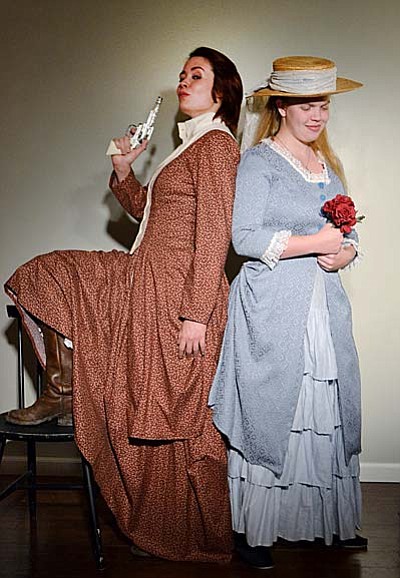 CAMP VERDE - Camp Verde Library Endowment (CVLE), the people who brought you 13 years of Denim & Lace, decided to change things up a bit for their 2015 library fundraiser. With Citizen's Committee for Camp Verde Library (CCCVL) they are partnering with Laark Productions to bring Shakespeare on Main: Much Ado About Nothing - set in the wild, wild west.

"We're not as young as we were when we started," said CVLE board president, Ambie Charles, "and a lot of physical labor went into making the [Denim & Lace] auction happen." The partnership with Laark Productions was an opportunity to take some of the workload off the shoulders of volunteers, while still offering a unique and fun social event for the library's loyal supporters.

This lively theater production will make Boler's Building the setting of the classic Shakespearean melodrama with a gun-slinging, spur-jangling twist. It one more way the community is celebrating Camp Verde's sesquicentennial. Imagine yourself stepping back 150 years into the town's past as you watch this tale of good versus evil play out in a battle between the sexes. Those familiar with the Denim & Lace dinner and auction know that, in addition to supporting the library, a lot of the appeal was getting to see and visit with friends.

"I've heard that Denim & Lace was the social event of the year," said Library Director, Kathy Hellman. "With that in mind, we have put together an evening event that gives people time to enjoy appetizers with a little wine or beer and the good company they've come to expect from CVLE events before the show starts."

Based in Prescott Valley, Laark Productions grew out of the combined artistic and business concepts of Karla and Lane Burkitt who have been involved in the performing arts in the area for 30 years. "We really love doing live theater," Lane Burkitt said. Laark Productions is a 501 (c) (3) organization committed to partnering with other nonprofits in support of their fundraising efforts. "Laark has a reputation for quality productions," said Hellman. "Last season, they did A Midsummer Night's Dream for the Highlands Canter for Natural History and the shows sold out." Camp Verde Community Library supporters will have two performances and two ticket prices to choose from. On Friday, April 10, the 6 p.m. show includes hors d'oeuvres and two complimentary drinks for $50 per ticket. On Saturday, April 11, the 1 p.m. matinee includes tea and biscuits for $30. Seating is limited so don't delay.

Tickets are available online at or in person at Camp Verde Community Library during open hours. For more information or to reserve your place at a performance, call the library at (928) 554-8380.