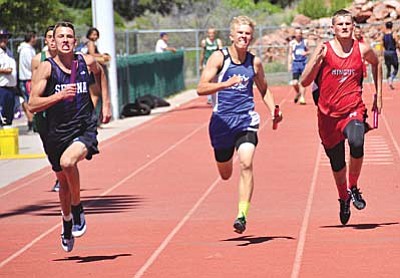 The top boys performer was Trevor Galloway, who finished first place in discus and set a personal record with a throw of 146-feet 1-inch. Galloway broke his previous personal record by almost 13 feet.

"He had a great throw there. I watched it," said head coach Yancey DeVore. "It was pretty smooth. He did that on his second throw."

Galloway also finished in second place in the 200 meters at 25.27 seconds.

Overall, DeVore said he was "real pleased" with the boys' performance.

Another Marauder who showed improvement was his son Keenan DeVore, who ran 4:44.61 in the 1600 meters. He beat his previous personal record by about 12 seconds.

"That was really good for him," Yancey DeVore said.

DeVore also said he was happy with his sprinters.

The boys 4x100 relay team of Levi Collins, Juan Ruiz, Galloway and Jordan Prouty finished in fifth place with a time of 46.57 seconds.

Galloway said that it was simple how he threw the best he has.

"I think it was because of the new coaching," he said. "We have new implements recently. I think the two combined well."

Galloway said he hopes his performance in the discus carries over into future meets.

"I want to build on it," he said. "And ultimately perform well at state and score for our team."

Galloway made state for discus last year, but didn't finish in the top 10.

He said he feels good about how is team is doing so far this season.