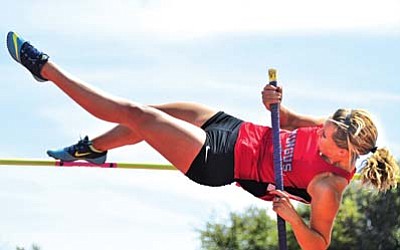 The highlight on the girls side was Allison Whitworth, who finished first in the pole vault with a jump of 9 feet 3 inches.

That tied a personal record for Whitworth. Whitworth also finished third in the high jump at 4 feet 8 inches.

DeVore was also part of the first-place 4x100 relay team that finished at 52.54 seconds.

Mingus Coach Yancey DeVore said this was the best time for the team on the season.

The only Mingus girl to run a distance event on Saturday was Cassia Gehl, who finished third in the 1600 meters with a run of 6:11.17.

On the Mingus girls team, throwing seems to be the most inexperienced.

The Marauders who threw on Saturday were Sarah Bramblett, Sydney Burns and Natalie

"They're inexperienced," DeVore said. "When you have younger kids, that's certainty an area that we need to work on. Those girls, they came to practice. They work hard. They'll get better. It will pay off for them."

Hard work has without question paid off for Whitworth, who said that outside training helped her do well in pole vault.

"I went to a clinic in Phoenix," she said. "It's called the Arizona pole vault academy. I went there on Tuesday. I learned a lot of stuff. I just applied it."

Whitworth said she wasn't surprised she finished in first place.

"Because at the academy, I was jumping 10 feet 2 inches," she said. "The only thing is I don't have a pole. So I was using somebody else's pole. I was actually expecting 10 (feet)."

Whitworth said she has specific goals for how well she wants to do in pole vault.

She said her past in high jump lets her expect where she will finish in that event.

"I'm going to clear 5 feet 2 inches," she said. "Because every year I've done that. Hopefully I can get 5 feet 4 inches this year. That's my goal."

This year, Whitworth is running hurdles despite never doing it in her previous three years in high school. She said she added it simply because she wanted one more event to do at the state tournament.