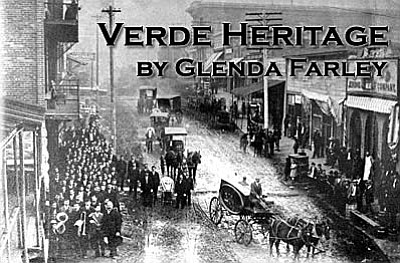 CLEOPATRA: "General Manager Hull of the Cleopatra company, informs the 'Jerome News' that he continues to place more men at work when the opportunity presents itself. They are now at work straightening out the old Winningham tunnel, and have, while doing this work, exposed some bodies of ore which those who were at work in the past seemed to have overlooked."

UNITED VERDE COPPER COMPANY: "At the United Verde mines they are making every preparation to work that great property to its full capacity. One of the 500-ton furnaces has been placed in commission."

"Monday the new shaft at the United Verde had reached the depth of eight hundred feet. The two shifts that have been at work sinking to the eight hundred will be continued until the nine hundred foot level is reached. They are making about two feet a day, which will require another fifty days to complete work now planned for the shaft."

"In making the new shaft a sulphide ore was struck on the six hundred and the shaft has never been out of it since. It will be remembered that a drift was run from what was then considered the main body of the United Verde ore to supposed ground. The two hundred feet of ore from the six to eight is only part of what is now expected from deeper developments."

DECATUR: "Superintendent Owens of the Decatur was in Jerome Saturday. He informed the 'News' that work on that promising group is progressing as rapidly as could be expected, and that the mine is now looking better than for the past thirty days."

MESCAL GULCH DISTRICT: "There is a part of the Jerome mining district which has so far been given very little attention, yet the mining men and experts who have visited it say that the small amount of work done on the ground has shown up more mineral than the same amount of work on any other part of that great copper belt, says the 'News.' The 'News' has reference to that part of the Jerome-Verde district lying about one mile and a little west of south of the city of Jerome, at the head of what is locally known as Mescal Gulch. A few days ago a 'News' representative paid a visit to this part of the district and was surprised to see the splendid surface showing, and the improvement in the general mineral indications where work has been done."

THREE SISTERS: "A visit to a claim called the Three Sisters, owned by G. W. Hull, disclosed an extra good showing of ore and encouraged a more thorough examination of the properties in that neighborhood."

VENTURE HILL: "The Venture Hill property, for which a syndicate had offered $1,500,000, the Verde King and the Lucky Verde companies properties extend up to near the head of this gulch, and as on the Hull property, they have more or less ore in all of their workings."

LARSON-AVERY: "Another interesting group is the Larson-Avery property, consisting of nine claims. This group lies along the west and north sides of the Lucky Verde, runs up against the west end of the E. L. D. claim of the Venture Hill group, and butts up against the Three Sisters claim on the north, south and east sides, and touches a claim called the Station on the east and west sides."

"There has been but very little work done on the Larson-Avery group, the deepest workings thereon being a shaft about forty feet in depth, but in all the openings the showing has been most encouraging, and all who visit the property seem to agree that with proper development the group can be made a very valuable one. Where work has been done on adjoining claims ore has been uncovered, and in the main shaft on the Lucky Verde group they have undoubtedly one of the best showings in the district, and this shaft is sunk but a few feet from the lines of the Larson-Avery group. The property is only about 600 feet from the main workings of the Venture Hill, which in itself gives it value."

"The group runs up to and extends into the lime capping which covers the head of the gulch, and the general formation is porphyry, black slate and lime. This would be an excellent group for some legitimate mining company to take hold of."