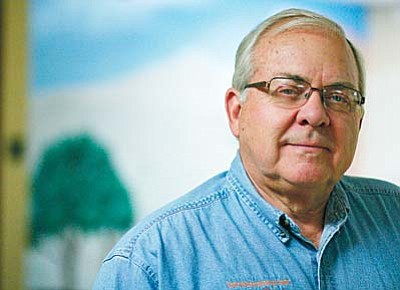 One of the Verde Valley Archaeology Center’s founding members, Executive Director Ken Zoll said the recent recognition as a Verde Valley Community Champion means that “our interests are shared and appreciated.” VVN photo by Bill Helm

CAMP VERDE - Almost five years ago, the Verde Valley Archaeology Center first opened, a dream of eight avocational archaeologists who wanted to preserve archaeological sites and collections, and to nurture an understanding of prehistory and American Indian history in the Verde Valley.

One of the center's founding members, VVAC Executive Director Ken Zoll said the center's recent recognition as a Verde Valley Community Champion means that "our interests are shared and appreciated."

"It's a nice recognition for our efforts to preserve the prehistorical sites and artifacts of the communities in the Verde Valley," Zoll said.

VVAC member Robert Whiting nominated the center for the Verde Valley Community Champions award for Tourism. According to the statement he gave on his nomination form, Whiting said that VVAC has been "very instrumental [in] the preservation and promotion of our prehistoric and historic native Americans that first settled in the Verde Valley."

Five years ago, Zoll was hoping to establish a place to hold classes for public education for children to learn about the "importance of preservation, where residents and visitors alike could see artifacts from the distant cultures and a place where we could store in a secure environment the items that have been entrusted to us."

Each year, VVAC members, docents and board members bring archaeology to life with various exhibits and excavation field schools, public talks and demonstrations, children's programs, as well as the cataloging, documenting and curating thousands of artifacts.

Recently, the center acquired more than 20,000 artifacts that date as far back as the 12th Century. Known as the Paul Dyck Collection, the artifacts were housed in a rockshelter on Dyck's Rimrock property in a small Sinagua dwelling prior to being unearthed during a 10-year excavation.

And one member joined VVAC so he could help curate the Dyck Collection.