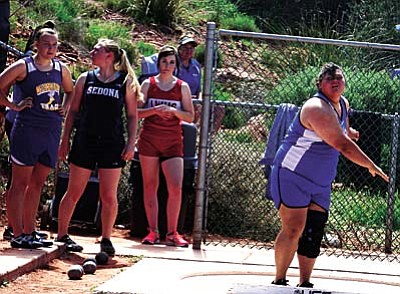 Camp Verde High School’s Viola Logston and Sedona Red Rock High School’s Hannah Ringle, rank 1-2 in the state this week in the shot put, with respective throws of 39-feet, 9-inches for Logston and 37-10 for Ringel.

One year ago, two Verde Valley track and field athletes were considered among the best throwers in the state.

Mingus' Heather Calandra won the Division III state championship in the shot put with a massive throw of 44 feet, 6.25 inches. Sedona-Red Rock's Gabriella Simon was the state champion in the discus with a throw of 116 feet, 4 inches.

One year later, Calandra and Simon are gone, but Verde Valley throwers still dominate the top spots in Arizona among Division III schools.

This week's Arizona high school track and field rankings on athletic.net show four different girls ranked among the state's best in both the shot put and discus. Camp Verde senior Viola Logston and Sedona-Red Rock's Hannah Ringel rank 1-2 in the state this week in Division III.

In addition, Sedona-Red Rock senior Marisa Carrara is ranked No. 7 in the state in the shot put with a best throw of 33-feet, 1.5 inches.

Verde Valley athletes are nearly as dominant in the discus with Carrara holding down the No. 2 spot in the state with a throw of 112-feet, 7-inches, while Camp Verde's Alyssa Watkins is ranked No. 4 with a best throw of 106-.075.

Sedona's Ringel and Camp Verde's Logston are ranked 7-8 in the state.

It's not just Verde Valley girls who dominate in the throwing events. Mingus sophomore Trevor Galloway is head and shoulders above the rest of the Division III discus throwers in the state with a best throw of 146-feet, 1-inch.

Teammate Levi Collins, a senior, is ranked 15th in the state in the shot put with a best throw of 41-feet, 6-inches.

Other top-ranked Verde Valley track athletes this week, according to athletic.net, include:

Boys sprints: Mingus senior Javin Helsel is currently ranked 6th in the state among Division III athletes in the 400-meter dash with a best time of 51.99 seconds.

Boys hurdles: Sedona senior Andre Davis is ranked 1st in the state (Division III) in both the 110-meter high hurdles (15.16 seconds) and the 300-meter hurdles (40.05 seconds). Teammate Chai Voccola is ranked 5th in the state in the highs at 15.94 seconds.

Boys Jumps: Sedona's Dawson Stevenson is ranked 4th in the state with a jump of 6-2; Mingus' Evan Snyder is 9th at 6-feet. Sedona senior Jacob Carter is 5th in the state in the pole vault at 12-6 and Mingus junior Chance Gribauskas is 8th at 12-feet.

Girls sprints: Mingus sophomore Auli Hanks is ranked 12th in the 100 meters with a 13.19-second clocking.

Girls hurdles: Mingus' Briana Epperson, a sophomore, and freshman Hannah Devore are ranked 9th and 12th in the 100-meter hurdles while Sedona frosh Chenoa Crans is 11th; she also is ranked 8th in the 300 hurdles.

Girls jumps: Mingus senior Allison Whitworth is tied for the state's 6th best in the high jump and she's ranked 4th in the pole vault, just ahead of Sedona's Alexandra Hawes and Mingus teammate Kylie Streck.