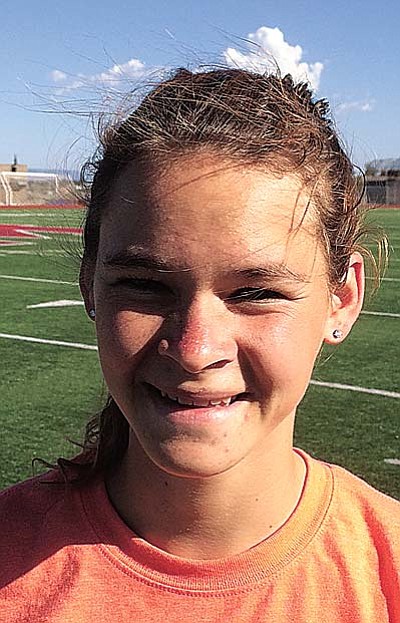 LAKESIDE - On Friday, Mingus Union High School track and Field competed in the Blue Ridge Invitational at Blue Ridge High School. Both Mingus' boys and girls finished fifth out of 19 schools. The Marauders boys scored 52 and the girls scored 42.

On the boys side, senior Javin Helsel had a good day. Helsel finished first in the 400-meter dash at 51.54 seconds. He also finished third in the 200 meters at 24.05 seconds.

The boys 4x100-meter relay finished fourth at 45.63. That team is made of Helsel, Juan Ruiz, Jordan Prouty and Levi Collins.

Collins finished seventh in shot put with a throw of 40 feet 3 inches. He also got a personal record in the discus at 120 feet 3 inches, good enough for seventh place.

For the second straight meet, Trevor Galloway won the discus, this time with a throw of 130 feet 10 inches.

Chance Gribauskas got a personal record in the pole vault with a jump of 12 feet 6 inches, which is an automatic qualifying jump.

Head coach Yancey DeVore said his team did well despite not ideal conditions.

The Mingus sprinters seemed to make up for the distance performance. DeVore said the 4x100-meter relay ran the best time of the season.

"Some of our sprinters had a lot of PR's," DeVore said. "Overall that was pretty good."

Gribauskas said dedication is what led him to his best pole vault ever.

"Just a lot of hard work," he said. "I've been going to private coaches in Phoenix. I've been just concentrating a lot."

Of all the Mingus boys track athletes, few do as much as Collins.

The senior threw both shot put and discus on Friday and was also in the 4x100-meter team.

"I think my day was pretty good," Collins said. "I had a couple of throws that weren't marked that were better than what they gave me. They just weren't paying attention."

Collins' throw in the shot put of 40 feet 3 inches is just short of his personal record of 41 feet 6 inches.

"I just need to stay low and fast," he said.

Collins shot put performance is strong, considering he hasn't practiced it much this season.

"I think it's because over the summer I got a lot stronger," he said. "I've been stronger and faster than last year."

For Mingus girls, some top performers included Auli Hanks. Hanks got second in the 100 meter dash at 13.39 seconds. Hanks also got 12 in the long jump at 14 feet.

Hanks said she was happy with her performance.

Hanks is a sophomore in her third sport of the year. In the fall she played volleyball and in the winter she played soccer.

Despite all the sports, Hanks said she isn't feel fatigued.

Next for the Marauders, they will host their one home meet of the year at 2 p.m. Friday.