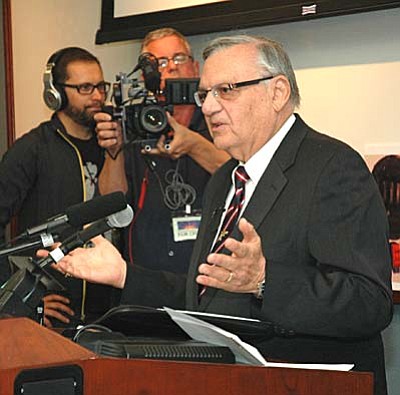 PHOENIX -- Saying there was plenty of evidence to back the finding, a federal appeals court on Wednesday upheld a trial judge's ruling that the Maricopa County Sheriff's Department has engaged in a pattern of racial profiling.

In a unanimous ruling, the three-judge panel of the 9th U.S. Circuit Court of Appeals rejected the contention of Sheriff Joe Arpaio that whatever his officers did in targeting Hispanics was limited to his special "saturation patrols.' What that means, the sheriff's lawyers argued, is that any court order not to discriminate should be limited to those operations.

But Judge Clifford Wallace, writing for the court, said there was plenty of evidence that deputies were pulling over Hispanics -- and detaining them for long periods -- even during their regular day-to-day patrols. And that, the judge said, merited the injunction to bar deputies from detaining any individual based only on their belief the person is in the country illegally.

The court did side with Arpaio on one issue, concluding that the trial judge exceeded his authority in requiring a special court-appointed monitor look into internal investigations and reports of officer misconduct.

Cecillia Wang of the American Civil Liberties Union, called Wednesday's ruling "a significant victory for the community and Maricopa County.'

"The sheriff once again was rebuffed by a federal court holding that his practices of racially profiling Latinos in the name of his immigration enforcement efforts is unconstitutional,' she said.

Wednesday's ruling upholds the findings last year by U.S. District Court Judge Murray Snow that Arpaio's department, under his direction, was detaining individuals believed to be in this country illegally without some other reason to arrest them for violating any state laws. Snow said that continued to occur even after the Department of Homeland Security revoked the department's authority to identify and detain those not in the country legally.

The judge also said department policy and practice allowed officers to consider the ethnicity of a vehicle's occupants in determining whether they have reasonable suspicion to investigate them for violation of state immigration laws.

"In some instances these policies result in prolonging the traffic stop beyond the time necessary to resolve the issue that initially justified the stop,' the judge wrote. Absent some reasonable suspicion of criminal activity, holding people longer than necessary violates their constitutional rights against unreasonable search and seizure, he said.

What all that meant, Snow ruled, is that entitled Hispanic individuals who sued to an injunction permanently barring Arpaio's department from using Hispanic ancestry or race to determine whether to stop a vehicle. It also prohibits deputies from detaining or arresting Latino occupants of a vehicle on a belief that they are in this country illegally if race is the only factor they have.

The order also bars the agency from detaining Latino occupants of vehicles stopped for traffic violations any longer than necessary to process the citation unless officers have "reasonable suspicion' that any are committing a federal or state crime.

Of particular concern to the sheriff in the appeal is that Snow appointed a monitor to keep tabs on employee behavior, including requiring audio and video recordings of traffic stops. There also were requirements to keep records to detect evidence of racial discrimination in these stops and to train deputies how to act within the law.

Arpaio did not contest that for the special "saturation patrols,' essentially flooding an area with deputies in what he said were efforts to suppress crime. But he said there was no basis for such oversight of his deputies' day-to-day operations.

Wallace acknowledged that the evidence presented largely addressed how deputies were behaving during the saturation patrols. But the appellate judge said there was evidence -- including testimony from Arpaio himself -- that his department was continuing to enforce immigration laws and that deputies continued to look into immigration status of anyone in any vehicle stopped and not just in those saturation patrols.