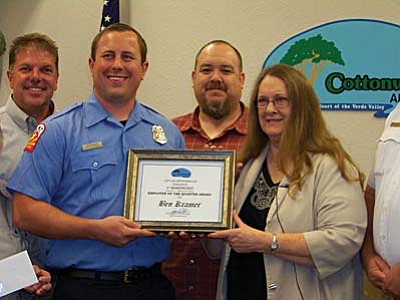 Ben Kramer is recognized by Cottonwood City Council as its Employee of the Quarter.

Kuykendall explains that the time lapse of a call, from when it's received by the 911-center until it is dispatched to first responders is called the "time to dispatch." The national standard is 60 seconds, but in the past, a drag in that time delay by processing the call through the Sedona dispatch center has averaged about 120 seconds. Reducing this drag has been one of the goals since opening the Cottonwood Communications Center.

The chief said that Ben has a rich understanding of computers, software and mathematics and has able to learn in the software and putting the data into a usable visual form, not just for "time to dispatch" data, but other types of calls to be identified and reduce delays. That information has been especially useful to attract other subscribers to the dispatch service.

Kramer has also been instrumental in presenting data to show that the service is exceeding local, regional and even national standards in such matters as the ISO rating, which for Cottonwood Fire, dropped from a rating of 4 to a 2 rating, an issue also lowers the cost of a property owner's insurance coverage.

Kuykendall also said that Kramer continues to hone his skills in car safety seat installation and instruction while working with Verde Valley Fire to streamline the distribution of the car seats. He was also asked on short notice to train paramedics with Verde Valley Ambulance in the installation of car seats, when children must be transported along with their parents, etc.

The city has kept a handwritten paper log in the past to document controlled burns as required for the Department of Environmental Quality. Kramer, working with administrative assistant Cheryl Miskiel, helped make the document electronic that can be shared and accessed by the Fire Department and Communications Center.

Outside the department, Kramer is a partner in the Old Town Frame Shop and personally framed the department's large wall-mounted response area maps for the fire department.

In his personal time, Kramer, a Clarkdale resident volunteers on the Clarkdale Library Board.