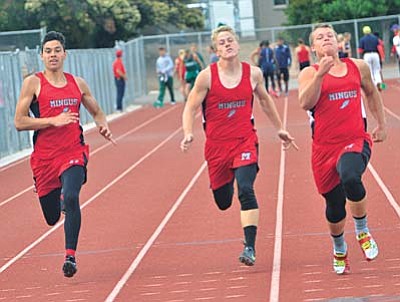 COTTONWOOD - Mingus Union High School track and field competed in its first and only home meet of the year.

It was a strong day for the Marauders.

Trevor Galloway also had another strong performance. Galloway took first in the discus with a throw of 136 feet 11 inches.

He also placed sixth in the shot put at 37 feet 7 inches.

Gribauskas also finished seventh in the 100 meter hurdles at 19.34 seconds.

Alec Phyfer finished fourth in the 300-meter hurdles at 48.79 seconds.

On the girls side, the 4x400 meter relay team of Auli Hanks, Hannah DeVore, Mackenna Jung and Megan Goettl finished in second place at 4:20.38.

After the meet, head coach Yancey DeVore said he was happy with how his team did.

"I feel really good about it," DeVore said. "We pulled it off."

DeVore said he was especially impressed with Sandoval.

He added he was happy with Goettl's performance.

"Megan had a great day in the 1600 and the 800," DeVore said. Galloway also had a great day. He credits the coaching for how well he's been doing in discus this season. "I think we've been having good practices," he said. "We've had a good practice schedule. Coach (Lacy) Brown is a good coach. She knows what she's doing. It's not just me who has been doing better in discus, it's everyone on the whole throwing squad."

Galloway had a good shot put throw, though he said it's not his favorite event.

"I just want to keep improving on it," he said. "It's something that I can do well at eventually. Then I would be more than happy to do it. I just try to get ways in state and score for the team."

There's no doubt Collins will be scoring for the Marauders.

The senior said he had mixed feelings about his final home track meet.

"It's bittersweet," he said. "It's fun, but then again it has to end sometime."

Collins added that his 4x100 relay team had some exchange problems that led to a worse performance than it should have.

Sandoval probably couldn't have asked for a better individual performance. The junior won his first event of the season.

Sandoval's 1600-meter win came with a little bit of controversy. A runner from Bradshaw Mountain High School seemed to be attempting to trip him towards the end of the race. That got him disqualified. Sandoval said he apologized to him after the run was over.

Sandoval said right now the distance runners have a certain goal in practice.

"This week in practice, we've been trying to up the speed work," he said. "So we get use to going fast. That's the way coach [Jim] Bostwick does it. He builds it up, he runs you dead tired, but then you get rested so you get a big [personal record]."