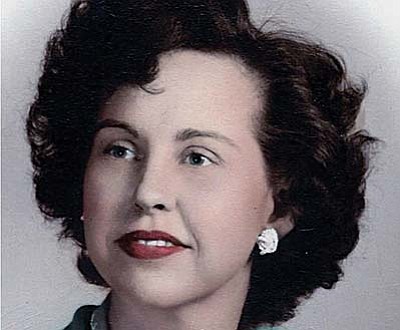 Thelma was born August 8, 1922 to Frank James Ingle and Aurena (Irene) Belle Fowler in Alicia Arkansas and left this world for heaven April 14, 2015 in Cottonwood, Arizona at the age of 92 years and 8 months.

She will be buried at Randolph Memorial Gardens alongside her husband Golie, her sons Dale (aka Smitty), Frank and Jim along with her sister Eileen and brother-in-law Jim Smith.

She was raised in Alicia where she excelled in school skipping two grades, played basketball, loved to dance, met and married Golie, the son of Frederick and Florence (Cotham) Smith when only 17. She had her 1st son Ronald Dudley the day before her 18th birthday.

In 1949 She, Golie and the 2 sons moved to Keego Harbor, Michigan where Frank, Laurie & James were born.

She loved Michigan very much and only left at the age of 80 when she needed to be closer to family in Arizona where she spent the remainder of her life. However Arkansas was always home.