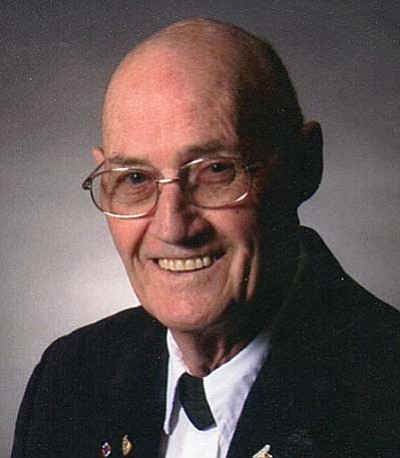 Norman L. Norvell (Tiny) passed away on April 18, 2015, at the age of 87 while at the beautiful Valley View Care hospice house. He is survived by his beloved wife Delores B. (Dye) Norvell (Dee); daughters Viann Davis and Kay Goodman (Matt); five grandchildren; and five great-grandchildren.

Tiny was born the third of ten children on June 7, 1927, in Peyton, Colorado, to Anna Brennan and Doc Norvell. He is survived by two of his siblings - LP Norvell and Vernon Norvell. His family worked and lived on a ranch and raised pigs, cows, and crops.

Tiny was a World War II veteran. He entered the army when he was 18 years of age, served for three years, and couldn't wait to get home!

Tiny and Dee moved to Cottonwood in 1973 where he worked for various local road construction companies. They retired there in 1990. Tiny volunteered as bar manager at the Loyal Order of Moose Lodge 1449. He worked on the wiring of the big Moose hall in Clarkdale where he earned his 'Fellowship Degree' and Blue Jacket. Tiny also volunteered his time at Jerome Elks Lodge 1361, American Legion #25, and VFW Post #7400 where he was an honorary member.

In 1994, Tiny and Dee started traveling in their RV. They enjoyed this time together, sometimes traveling with other family members. They visited every state in the union with the exception of Hawaii (they just couldn't figure out how to get their RV there)! They also were able to visit Europe, Ireland, Wales, Scotland, and England with their daughters. They also took a cruise to Alaska. But their favorite time together were those years in the RV, alone, driving and dancing across America.

One of Tiny's many favorite things to do was to watch Nascar races. He always cheered on his favorite driver, Jeff Gordon. He enjoyed watching football, especially the Cardinals, and the Diamondback baseball team, as well, with his family. He happily looked forward to visiting with his grandchildren and great-grandchildren.

Visitation will be held at Westcott Funeral Home on Friday, April 24th, from 6 to 8 PM, a Vigil Service will be held at 7 PM. On Saturday, April 25th, there will be a funeral mass at the Immaculate Conception Catholic Church on Bill Grey Road at 9 a.m. There will be a reception held at the home of Tiny and Dee Norvell (1890 Hill Top Drive) starting at around 11:30 a.m. If anyone would like to make a food donation for the family, food can be dropped off at their home before, during, or after the funeral mass. Please feel free to stop at the house even if you do not attend the Funeral Mass.