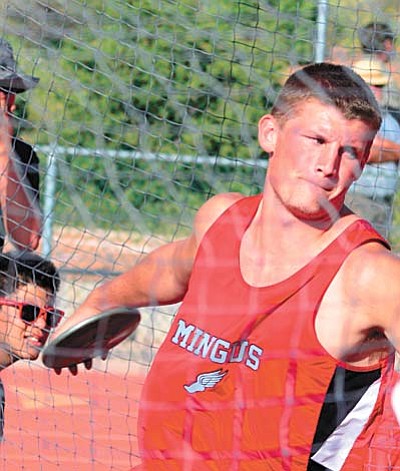 Mingus’ Trevor Galloway finished first in the discus with a throw of 140 feet 1 inch. Galloway credits the coaching of Lacy Brown. VVN/Derek Evans.

SEDONA -- Mingus Union High School Track and Field competed in the Sedona Invitational at Sedona Red Rock High School on Tuesday. It was a good day for several Marauders.

Levi Collins finished first in shot put with a personal record throw of 44 feet. Collins also placed third in the discus with a throw of 117 feet 8 inches.

Stefeno Dalu finished tenth in shot put with a throw of 35 feet 7 inches.

During Wednesday's practice, head coach Yancey DeVore said he had mixed feelings about his team's performance.

"I felted OK about it," DeVore said. "Some of the kids didn't do as well as they could have. It got a little cold at night, no excuses. Some kids got [personal records]. Some of the kids put themselves in good spot for state."

There's no question Mingus will send several boys throwers to state. One of the reasons for their success has been new throws coach Lacy Brown. Galloway has credited Brown with his high throws in the discus.

Brown said she has helped her throwers in the little things.

"I've been working with them on footwork," she said. "And on balance because it's so technical with throws."

Brown mentioned there is one common problem with throwers she focuses on.

"The hardest thing with throwers is they want to watch where the throw goes," she said. "I was that way as a thrower as well. I really emphasis with them to focus on their form and trying to think what they need to do next time to be better, not worry so much about where it's going."

Helsel is hoping his impressive performance can carry into the Yavapai County Championships on Friday. The 51.57 was the second best he's ran in the 400 meter dash this year.

Helsel said he was happy with the overall performance on Tuesday.

"The whole team did well," he said. "We were placing in one, two and threes. It's been looking good. Especially with all the competition from other divisions."

Keenan DeVore's performance in the 1600 meters was probably just as impressive as Helsel's in the 400 meter dash.

DeVore tied his PR, which he also got at Sedona this year.

"I think it helps a lot that it's the same elevation as here," he said. "I think I'm about 20th for state right now."

The top 24 in each event make the state meet. DeVore hopes he can make state for both the 1600 and the 800 meter runs.

Goettl is looking good for making the state for at least the 1600 meters. Goettl said she ran well, but she should have done better.

"I'm happy that now it put me third in state," she said. "Which is better than I was before, but I still want to be higher up there."

Goettl has been a member of the Mingus girls team that has won the Division III State Championship the past three years in a row. It looks like it will be hard for the Marauders to do it again this year.

"Every girl just has to go out there with all the determination and give it the best she can," Goettl said.

Next for the Marauders, they will be at the Yavapai County Championships at Bradshaw Mountain High School on Friday at 2:30 p.m.