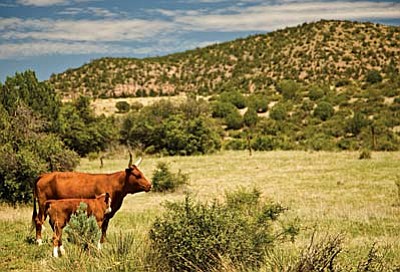 The 80-plus plaintiffs in the case own a combined 430,000 acres of the approximately 750,000 private agriculture acres in the county. They include locally well-known names such as Chino Grande, Deep Well, Fain, Hays, Kieckhefer, Maughn, McCraine, Orme, Teskey and Yavapai Ranch. Thinkstock.com

PRESCOTT - A huge alliance of Yavapai County ranchers is appealing portions of a tax court ruling about the value of the county's grazing land.

Even though a tax court judge lowered the value of their grazing lands for property tax purposes, the judge didn't consider the values of federal and state grazing leases, which generally are lower.

"In order for anybody to be in the cattle business (here), we have to have state or federal leases," said plaintiff Andy Groseta, a Verde Valley rancher and the immediate past president of the Arizona Cattle Growers' Association that joined the Arizona Tax Court appeal of the county assessor's values. Only 25 percent of the land in Yavapai County is private, according to government statistics compiled by the Western Rural Development Center.

Groseta said he fears the higher tax rates will push ranchers out of business, along with the open space and wildlife waters they provide.

"You can't afford to pay taxes, you go out of business," he said.

In the appeal filed earlier this month, the ranchers also ask the Arizona Court of Appeals to award them all of their attorney and court costs. Tax Court Judge Fink awarded them only $30,000 for attorney fees and $13,400 for expert witnesses.

The Yavapai County Assessor's Office says it's inappropriate to include public lands leases in values because they are not "arms-length" transactions.

"Again, we see this group of powerful ranchers trying to use the legal system to get a sweetheart deal," Assessor Pam Pearsall said. "No taxpayer should get preferential treatment, no matter their name, their industry or their wealth."

Plaintiff Brad Fain accused Pearsall of "political grandstanding" and pointed out that ranchers face an assessment ratio of 15 percent while the ratio on homes is only 10 percent. So $100,000 worth of grazing property is taxed at $1,800 while $100,000 worth of residential property is taxed at only $600 (after the maximum education tax credit that only homeowners receive in Arizona).

"All of the ranchers in Yavapai County want to pay their fair share of taxes," Groseta said. "However, we expect the County Assessor to follow state law in determining our values."

The 80-plus plaintiffs in the case own a combined 430,000 acres of the approximately 750,000 private agriculture acres in the county, Pearsall estimated. They include locally well-known names such as Chino Grande, Deep Well, Fain, Hays, Kieckhefer, Maughn, McCraine, Orme, Teskey and Yavapai Ranch.

Previous assessors left grazing land values at $7.56 since 1986, so Pearsall asked the Arizona Department of Revenue to conduct a study and then she used it to increase values to $25 per acre in 2011. That increase would have taken place over a period of 20 years since a new state law restricts annual value increases, Pearsall said.

The consortium of ranchers challenged their values in Arizona Tax Court and sought countywide values of $3.54 per acre, based on their own study.

Judge Fink lowered their $25/acre grazing land values to $9.19 per acre in 2012 and $10.10/acre in 2013. The judge said the Assessor's Office should have gone beyond the state report and localized numbers.

Pearsall said she still believes her values were fair, and she since has made them even more fair by varying values based on the cattle carrying capacity of the land. Ranches in desert areas are valued as low as $7.50 per acre now, while values in more lush areas such as the Verde Valley can reach a maximum of $40 per acre. The average is about $20 per acre based on a carrying capacity of eight cows per acre, said Jennifer McGovern, land supervisor in the Assessor's Office.

The Assessor's Office also hires an expert every year to analyze grazing lease prices, to help the Assessor update fair values, Pearsall said. She provided a copy of the latest study.

County officials estimate the ranchers will get a combined $110,000 in refunds on their 2012 and 2013 taxes because of the court ruling. However, the overall increase in grazing land values adds up to nearly $3 million of value, Pearsall said. She also accused dozens of the ranchers of failing to report improvements.

Earlier this year, the Yavapai County Board of Supervisors and the ranchers reached a tentative agreement on how to value livestock grazing land for property tax purposes in the 2014 and 2015 tax years. They agreed on a value of $10.10 that results in a combined refund of $57,000 on the 2014 taxes the ranchers already paid.

Both sides lamented the cost of the litigation and blamed the other side. Because the family of Yavapai County Attorney Shelia Polk's husband is one of the plaintiffs, and because her husband also is an attorney for one of the plaintiffs, the Attorney's Office had a conflict of interest so the Board of Supervisors had to hire a private tax attorney. While county attorney's offices often help each other out on criminal cases with conflicts of interest, they generally don't do that with civil cases, Polk said.

The county has spent an estimated $292,000 on its attorney so far, County Administrator Phil Bourdon said.

"The sad part is, every dollar of this litigation represents money that will not be spent on much-needed county services," Pearsall said

The plaintiffs have spent close to $400,000, Groseta estimated.

"If Ms. Pearsall wants to write the laws, let her run for the State Legislature," Fain said. "Failing that, Ms. Pearsall should resign as assessor and consider another political career or, better yet, go back to the private sector, because the taxpayers simply cannot afford to have Ms. Pearsall continue to serve as the assessor."