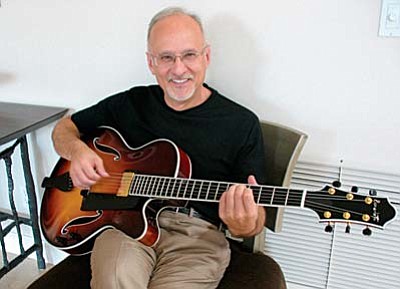 It's official: Cinco de Mayo will be celebrated by a special Sunday afternoon Sedona Jazz at the Church concert of Latin jazz with the Cinco de Moio Quartet, consisting of Dom and Bill Moio, Todd Johnson and Joe Garcia.

Percussionist Dom Moio, who is in his 20th year with Arizona State University's Jazz Faculty, studied with Cuban percussionist master Walfredo Reyes in the 1980s, and subsequently penned his well-received book "Latin Percussion For Gringos."

Through the years Dom has maintained a busy schedule throughout Arizona and the West Coast, performing with a variety of musicians, including Don Menza, Red Holloway, Herb Ellis, Ahmad Jamal, Armand Boatman and various other Southwestern jazz musicians.

Guitarist Bill Moio -- Dom's brother -- studied under the late jazz guitar master William Leavitt at Berklee School of Music in Boston, and then traveled to Nevada, gigging as house guitarist at both Harrah's Reno and Harrah's Lake Tahoe for several years, where he worked as orchestra leader.

Bassist Todd Johnson is a pioneer of the six-string electric bass, and has developed the ability to play chord changes and bass lines simultaneously, giving a guitar-like performance reminiscent of legendary guitarists Joe Pass, Wes Montgomery and Ron Eschete.

Todd has performed with numerous artists, including Poncho Sanchez, Plas Johnson, Lew Tabackin, Jack Sheldon and Rufus Ried, among others.

Percussionist Joe Garcia -- of Cuban descent -- began playing drums and percussion at the age of 13 in the heavily Latin-influenced city of Miami, Fla.

Sunday's gathering is the fifth of 13 concerts for Sedona Jazz at the Church for 2015, with the next concert taking place on Memorial Day Weekend with trumpeter/flugelhornist Fred Forney bringing his trio to Sedona for the weekend.

Tickets for Sunday's concert are $13, and are available online and also "at the door."

Tickets bought online will be held at the church at "Will Call," and entitles the bearer to be admitted before tickets are sold at the door on the day of the concert.

Saint Luke's Church is the home of SJATC, and is located in the Chapel area of Sedona, on Highway 179 between the Back O' Beyond and Chapel Road roundabouts.

For more information, telephone the church (928-282-7366) or visit the internet home of Sedona Jazz at the Church, found at www.episcopalnet.org