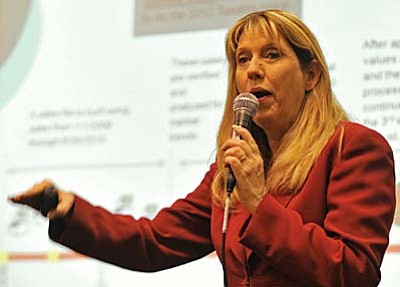 County Assessor Pam Pearsall proposed eliminating the job of the wife of County Administrator Phil Bourdon, in place of a proposal from Management Information Systems Director Michael Holmes that would cause Pearsall to lose her team of five cartographers to MIS.

Holmes conducted a written analysis of the assessor's Cartography Division that estimated the cartographers are spending only 38 percent of their time doing work for the assessor. Bourdon helped with a small part of the analysis, and reviewed it as Holmes' boss. During his budget meeting Monday, Holmes proposed putting the cartographers under MIS so they also could do work for other departments and save the county the expense of replacing a part-time Public Works Department cartographer.

Pearsall then offered her written cost-savings proposal to combine the title and cartography divisions, thereby eliminating the Title Division supervisor position held by Tina Bourdon, a county employee for 20 years. Pearsall offered to give the cost savings from her plan to the MIS Department so it could hire its own cartographer. She said the chief cartographer can do title work but the title division chief can't do cartography, so the latter has to go.

"I would not have done it to be spiteful," Pearsall said after the meeting when asked if it was a coincidence that Bourdon's wife would lose her job under Pearsall's proposal. "I can't help that somebody is related to somebody else.

Bourdon and the supervisors were clearly surprised at the coincidence, but no one discussed it during the meeting. Some were not immediately aware that Pearsall was proposing to eliminate the job of Bourdon's wife.

"I don't know" if it's a coincidence, Board of Supervisors Chair Craig Brown said after the meeting. "I'm not going to speculate."

Bourdon immediately knew that Pearsall's proposal would eliminate his wife's job, of course.

"That was the first time I heard of it," Bourdon said after the meeting. He didn't want to comment on it.

"I need to remain impartial," Bourdon said, noting that the supervisors will make a decision about what to do with the cartographers. The assessor also has the right to cut a position since she's an elected official, Bourdon said.

The supervisors scheduled a special May 18 study session to discuss the competing proposals, and Pearsall agreed to discuss the issue further with Holmes.

But later on Monday, the assessor issued a news release saying she would combine the two divisions and eliminate a division head position.

"I feel bad for Phil's wife," Brown added. "She's put in a lot of years and always done a good job from what I understand. I feel bad for him, too."

During the board meeting, Pearsall and her chief cartographer both said the cartographers have plenty of full-time work from the assessor. They explained that the cartographers create all property parcel lines in the county, so all the taxing entities and property owners depend upon their basic information. They also listed other duties.

"It's terrifying for you to take away my mapping department when I'm responsible to the (Arizona) Department of Revenue," Pearsall told the board.

Supervisor Rowle Simmons said he also heard the cartographers have extra time on their hands.

"We're getting conflicting reports," Simmons said during the meeting

Supervisor Chip Davis, who joined the meeting by phone, said the cartographers worked for the MIS department until a few years ago. He questioned why the assessor is just now saying she can do without a division head.

"That's exactly why the Board of Supervisors needs to take control," he said. It makes sense to have the Geographic Information Systems (GIS) employees and cartographers in the same department, he added.

"I really believe (a former employee) was set up on this phone call," Remster told the board.

"That's kind of getting into emotional, crazy stuff we need to stay away from," Davis responded.

All the supervisors then agreed to end the conversation until the May 18 study session.