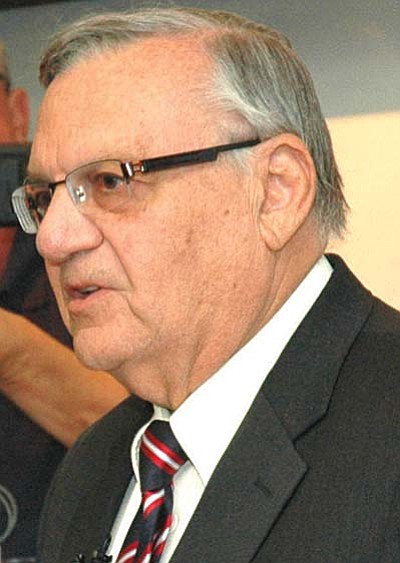 PHOENIX -- Gov. Doug Ducey is not ready to put any distance between himself and Joe Arpaio.

"Let's see how the court hearing plays out,' the governor said in response to a question of whether he still supports the sheriff.

The comments came at the end of a week of testimony by the sheriff and some of his top deputies at a federal court hearing to determine if Arpaio should be found in contempt of court. That included the bombshell admission by Arpaio that his attorney hired a private detective to investigate the wife of the judge hearing the case.

Arpaio and his top aides already have admitted they did not carry out the judge's orders in a racial profiling case. That essentially leaves Judge Murray Snow with only one question: Whether there will be a financial penalty against the sheriff, and whether he will have to pay it out of his own pocket.

But there also is the possibility of criminal contempt charges.

"Let's see what the verdict is,' said the governor who was endorsed in his 2014 Republican primary campaign by the sheriff. "I'm watching this with the same interest you are.'

But Ducey showed no regret about accepting the sheriff's endorsement, saying Arpaio deserves some praise.

"I think that Maricopa County is a very safe place to live,' the governor said.

"I think we have a very good public safety system,' Ducey continued. "And I think Sheriff Joe has been a big part of that.'

Still, the governor is keeping open his option to change his mind.

"Let's see how the court hearings play out and then I'll have further comment,' he said.

The case stems from a ruling by Snow that Arpaio and his deputies were guilty of racial profiling.

Snow said the sheriff's department, under Arpaio's direction, was detaining individuals believed to be in this country illegally without some other reason to arrest them for violating any state laws. The judge said that continued to occur even after the Department of Homeland Security revoked the department's authority to identify and detain those not in the country legally.

The judge ultimately issued an injunction barring the department from using suspicion of being in this country illegally as a reason to stop or detain individuals. And he specifically ordered the sheriff to stop the "saturation patrols' that were sweeping up migrants.

On the stand this past week, however, Arpaio said did not intentionally violate any court orders and said he delegated compliance to underlings. And at one point the sheriff told that judge that his order "slipped through the cracks.'

But that did not square with videos of the sheriff at prior events where he insisted that no federal judge could tell him what to do.

The biggest surprise, however, came Thursday when the sheriff, being questioned directly by the judge, said he had seen an email from someone who claimed to have heard Snow's wife say that the judge "wanted to do everything to make sure I'm not elected.' The sheriff said his attorney then hired a private investigator to follow up.

"Results confirmed that your wife was in that restaurant,' the sheriff told the judge, saying the investigator talked with the witness and "confirmed that the remark was made.'

Arpaio separately acknowledged that in 2013 he used public funds to investigate the U.S. Department of Justice which has a separate racial profiling lawsuit against his agency.

There also was testimony by Sgt. Brett Palmer who said the sheriff had personally told him to continue enforcing immigration laws despite the federal court order.