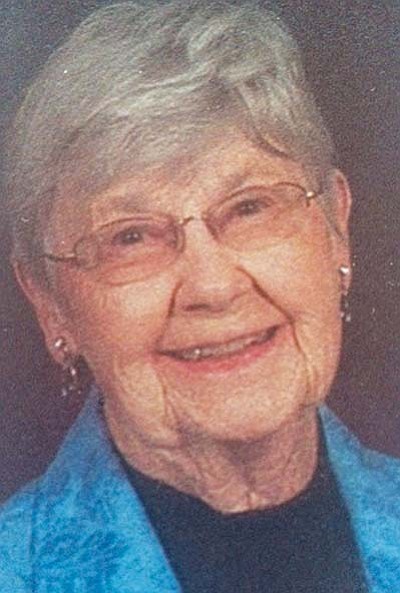 Arlene Ritchey of Cottonwood, Arizona, passed into eternal life on April 21, 2015. She was born on March 3, 1929 on the farm in rural Lansing, Iowa.

She was the daughter of Harold and Louise Ashbacher.  She attended a one-room schoolhouse for her first eight years of education and graduated from Waukon High School. She graduated from Iowa State Teachers College in Cedar Falls, Iowa with a Bachelor's Degree in Mathematics. She also attended the University of Iowa, University of Colorado, and the School of Mines and Technology at Rapid City, SD.

Arlene taught high school math at several Iowa high schools and also at the Jefferson County School District at Wheat Ridge Senior High in Colorado. She was married to her beloved husband, Richard (Dick) on July 11, 1964 at Lakewood, Colorado.

She leaves behind a son, Stan Ritchey and his wife Pat of Carbondale, CO, and a daughter Pam Brown of Cottonwood, AZ as well as 4 grandchildren and 6 great grandchildren. A daughter, Patti preceded her in death. She was one of five siblings, three brothers, John Ashbacher of Waukon, IA, Richard Ashbacher of Davenport, IA, Ronald Ashbacher of Lead Hills, AR, and a sister Dr. Dorothy Lincoln Smith of Paradise Valley, AZ.

She was a church organist in many churches in Iowa and Colorado. Her hobbies included music, photography, scrapbooking, photo albums, gardening and traveling.  She and her loving husband traveled to Canada, Alaska, Mexico, Guatemala, Belize, and all of the states in the United States in their 5th wheel.

They also toured much of Europe and Great Britain with a tour group.  They cruised the Caribbean's, Hawaii, Panama Canal and Antarctica where they walked among the penguins.

She and her husband resided in Fountain, Colorado for 23 years and in Cottonwood, Arizona for 14 years. Visitation Service will be at Dove Witt Family Mortuary on Friday, May 1, from 5-7 p.m.

The funeral service will be at the First United Methodist Church in Fountain, CO on Saturday, May 2, at 10 am.

The burial is at Cedar Hill Cemetery at Castel Rock, Colorado.  Dove Witt Funeral Home of Fountain is officiating.  She was 29-year cancer survivor, and contributions in her memory may be made to any cancer organization.