Mingus Football puts on the pads in preparation for 2015 season 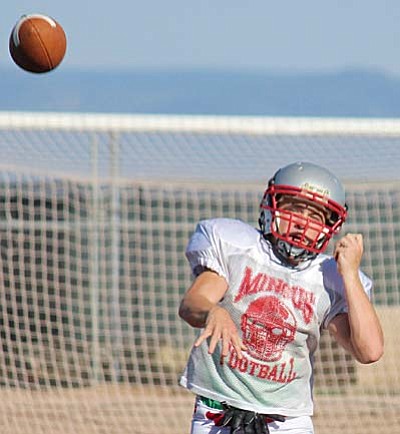 Quarterback Jordan Upham throws a pass to his running back in the flat. VVN photo by Greg Macafee.

COTTONWOOD - The Mingus Union Marauders opened up practice last week and on Monday they put on their pads for the first time this season as they prepare for their Red and Grey scrimmage at 7 p.m. on Friday, August 7. After a week of practice, Head Coach Bob Young said his Marauders have had productive practices and they were able to accomplish new things and get better every day.

Though he hasn't fully locked in his depth chart or filled it out, Young said he will wait till after the Red & Grey scrimmage to decide first and second teams, but he knows Jordan Upham will be his quarterback going into the first game of their season. During the offseason there were talks that Young thought Upham would be more beneficial to the Marauders in a different position and as the season goes on that might be true for the senior gunslinger.

"He is our QB right now," Young said. "We have a couple of younger guys that are working at it, so we will see as the season progresses, but for the start of the season Jordan is our quarterback."

Upham has also risen as one of the seniors that will lead the team, after the first week of practice, Young said he has been the spoken leader so far, but Young will also look to the rest of his seniors for leadership throughout the season.

"All of the seniors will be leaders, but Jordan has kind of been the spoken leader so far, I have been really happy with all of our seniors so far," Young said. "Our seniors are always our leaders though and that is the expectation going into every year."

One thing that the Marauders do throughout their season is choosing weekly captains based on the week before. Four players will be chosen each week, so the captain duties will rotate throughout the 2015 season. With leadership taken care of, another thing that Young won't worry about going into the season is his teams' willingness to hit someone.

"I don't worry about them hitting," Young said. "We have a lot of guys that love to hit, I am not too worried about it. When they put the pads on they are excited it's a good excitement level."

Other than their willingness to hit someone, Young believes that his 2015 Marauders will have a lot of speed when they hit the field and he sees it as one of his teams' strengths going into the season. Along with the teams speed, the Marauders offensive line made some heads turn in the offseason and are hoping to add onto to that throughout the season.

The Marauders linemen competed in three big man competitions this summer and won two of them including one at Northern Arizona University where they took first place in most of the individual events, won the tug of war competition and came out on top, winning the entire tournament.

"The offensive line has done a really good job," Young said. "We have been really happy with them, they just have to keep progressing, we just have to build some depth, we might be ten deep there, and if that is the case then we will be really happy."

"Weaknesses is our depth we just have to develop some good backups," Young said. "We are deeper than we were two weeks ago but we are still not where I want to be."

The Marauders will kick off their season on August 7, with their annual Red and Grey intrasquad scrimmage at 7 p.m. Coach Young said that everyone from the freshman team up to the seniors will be involved in the game and in the week after the scrimmage Young will be able to decide first team and seconds teams going into their scrimmage against Alhambra.

"After the scrimmage we will determine first team and second team," Young said. "That is what I always tell them until the Red & Grey scrimmage there is no first team or second team, so after that we will know."

Following the Red and Grey scrimmage on Friday the team will travel down to Alhambra on August 12 for a scrimmage at 6 p.m. before opening their season at home on August 21 against Cactus Shadows at 7 p.m.