Accident turns fatal at SR 89A and Page Springs Road 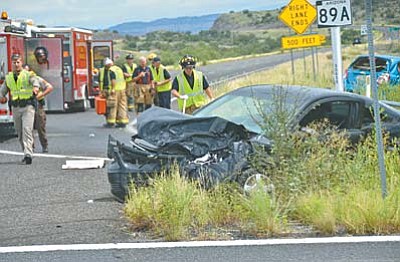 Department of Public Safety is investigating a fatal accident involving two vehicles at the intersection of Page Springs Road and SR 89A in Page Springs at about 10:30 a.m. VVN/Vyto Starinskas

CORNVILLE -- Arizona Department of Public Safety was called to an accident that turned fatal Tuesday morning at the intersection of Page Springs Road and SR 89A.

The collision that involved a Chevrolet Cobalt and a smaller blue Chevy Aveo was reported as having one unconscious patient.

Emergency medical technicians worked the subject with external defibrillators, but were unable to restore a beating heart.

Both vehicles wound up on the northeast shoulder of the intersection and only a single northbound lane was blocked.

The Department of Public Safety conducted the investigation and the Yavapai Sheriff's deputy assisted with traffic control.