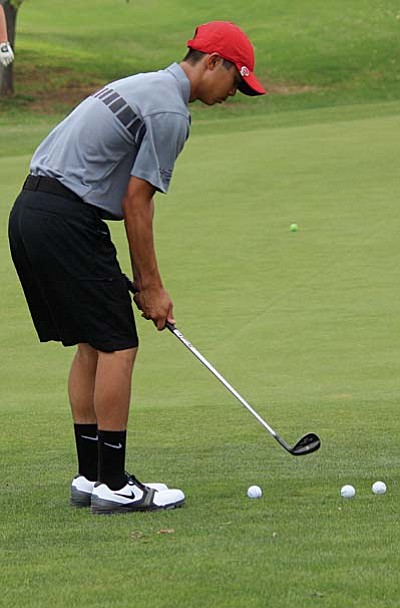 Sophomore Tyre Kim practices his chipping before heading out onto the course Monday. VVN photo by Greg Macafee.

COTTONWOOD - With a team that consisted of mostly freshman and sophomores in the top five last year, the future looks bright for a young Mingus Union Golf team going into the 2015 season.

Last year, the Marauders had two freshman and two sophomores that made up four of their top five spots. When competing, the top five golfers from each team compete in the match and the top four scores from each team are taken and the lowest score from each team is irrelevant to the final team scores.

"We struggled last year, we were really young," Mai said. "Our top players were two sophomores and two freshman and our fifth spot was hit and miss, with a little bit of everyone."

This year, the Marauders are still young, but with another year under their belt, Mai is optimistic how their 2015 season will go. With only the first practice and some offseason workouts under their belt going into the season Mai believes that his team will be made up of a senior, three juniors, three sophomores and five or six freshman rounding out the group.

"We are still young but those four guys have a year under their belt now," Mai said. "I feel we should be competitive this year, we have one senior on the team at the moment and a couple of freshman that look real promising so I am very optimistic about our season."

Along with an essential first season under their belt, the Marauders were at work this summer trying to improve their game to overcome expectations for the upcoming year. Four players from the team were able to work at their game over the summer, competing in Southwest PGA tournaments all across Northern Arizona that were held on Monday's all summer long. Mai and the team were also about to put in work on Tuesdays and Thursdays through the month of July.

Through the first couple weeks of practice Mai said his golfers will be working on their chipping and putting, getting warmed up on the range, and then just playing.

"First week we are going to work on chipping and putting, get warmed up on the range and then just go play and try to get a baseline of where everybody's scores are," Mai said.

"There is nothing that we do so well that we can ignore for a while, really we are trying to focus on our scoring clubs, nine- iron, pitching wedge, sand wedge, so we will spend a lot of time on that," Mai said. "Some days we will hit off the tee boxes, but I will give them a certain yardage and then have them play in from there so they get really used to concentrating on those clubs and get use to those distances."

After finishing in the bottom third of their section last year the young Marauders hope to improve on that record this year behind the efforts of some of their top golfers from last year who are returning to the squad this year. Mai believes that senior, Jonathan Link, juniors Keagan Lamb and Travis Nester, sophomores Tyree Kim and Ethan Brogdan, and freshman Justin Tanner, will be some of the key players on their 2015 squad.

Throughout the season the Marauders will play nine 9-hole matches, and five tournaments which will usually take place on Fridays and Saturdays throughout their season. The Marauders kick-off their season on August 25, with a match at Bradshaw at 3 p.m.