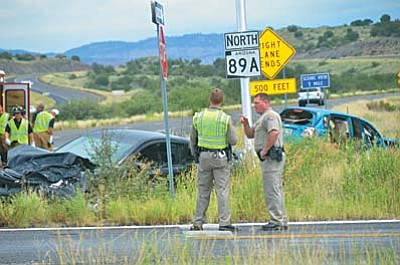 Department of Public Safety investigates a fatal accident involving two vehicles at the intersection of Page Springs Road and SR 89A in Page Springs at about 10:30 a.m. Tuesday. The deceased was later identified as 78-year-old Dennis Perry of Sedona. VVN/Vyto Starinskas

CORNVILLE -- The man killed in a T-bone style accident at the intersection of Page Springs Road and SR 89A Tuesday morning has been identified as 78-year-old Dennis Perry of Sedona.

The Department of Public Safety says that Perry was attempting to turn left onto Page Springs Road late Tuesday morning, when he lost control of the small Chevrolet Aveo which rolled into northbound traffic on the state highway.

The rolling vehicle was then struck by a northbound Chevy Cobalt, driven by another Sedona motorist.

Perry was reported to have died of injuries at the scene.

The woman in the second car was treated, but not admitted to the hospital.