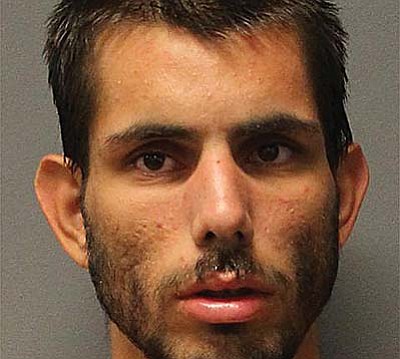 BEAVER CREEK -- Tuesday, Yavapai County Sheriff's deputies were sent to a home in the 2100 block of Beaver Creek Road in McGuireville, on a report of a stabbing.

Alan Sigarto, 22, was identified by two victims as the suspect but had already fled the scene, according to Sheriff's spokesman Dwight D'Evelyn.

A 41-year-old man had suffered a significant stab wound above his right knee and across the thigh.

The injury was not life threatening and he was treated by EMS personnel at the scene before admitting himself to the local hospital, D'Evelyn said.

A 42-year-old woman is the suspect's mother who also lives with the man stabbed. She said she was also threatened by her son during the incident, D'Evelyn also said.

The investigative report says that the man who was stabbed told deputies that an argument started when he slammed the door on his trailer.

The suspect reportedly first punched the victim in the face and then, brandishing a knife, threatened to stab him.

D'Evelyn continued that the victim reacted by tackling Sigarto and holding him on the ground to control his movement.

The suspect's mother asked the man to release Sigarto; and when he did, the victim discovered a laceration along his right thigh.

The wounded man called 911 and Sigarto fled the scene just before to the Sheriff's units arrived. Deputies quickly located Sigarto in the 4100 block of E. Valley Lane in Lake Montezuma and arrested him, the Sheriff's spokesman reported.

Both victims told investigators that Sigarto also threatened them with a large pipe which was dropped as he fled, D'Evelyn said.

Sigarto was booked at the Camp Verde Detention Center on several charges, including assault with a deadly weapon, assault/threats per domestic violence and disorderly conduct. He remains in custody and bond has not been set.