Mingus Volleyball back in action for 2015 season 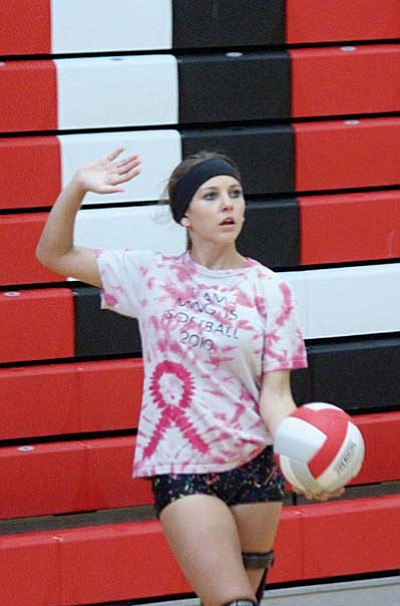 Morgan Mabery serves the ball during an intrasquad scrimmage in practice on Friday. VVN photo by Greg Macafee.

COTTONWOOD - The Cottonwood Volleyball team started their season Thursday after a couple days of tryouts under new Head Coach Loraine Roethler, who has served as the JV coach for two years and spent one year with the freshman volleyball team. After a season where the Marauders lost three seniors, Roethler replaces the lost seniors with a new class of three seniors and a squad filled with juniors and sophomores.

"We have some really great girls, some awesome attitudes, and I just hope it happens on game day." Roethler said.

The Marauders finished tryouts on Wednesday and held their first official practice Thursday and are still getting a feel for each other as a team as they head into their second week of practice. Roethler hopes that her young squad can use their defense as one of their strengths during the season.

"I hope to Have a really strong defense and play together and play hard," Roethler said.

Though their schedule has changed a little bit compared to last year, the Marauders will still face off with the Scorpions of Sedona, which Roethler says is something that's great to be a part of.

"Sedona is usually our rivals because of the distance so that is always a great game to watch and be a part of," Roethler said.

Even though she has a young squad Roethler believes that she has some younger and older players that will step up as leaders for the 2015 season.

"Quinn Thompson, a junior is getting her legs as strong middle player, Kaylee Gordon a senior as a setter, Morgan Mabery as a junior setter so we have some girls who are coming up for sure," Roethler said.

The Marauders will get their first action of the season on August 25, when they head to Joy Christian for their first scrimmage of the year. They have their first official game on September 3, when they play host to Tuba city at 6 p.m.