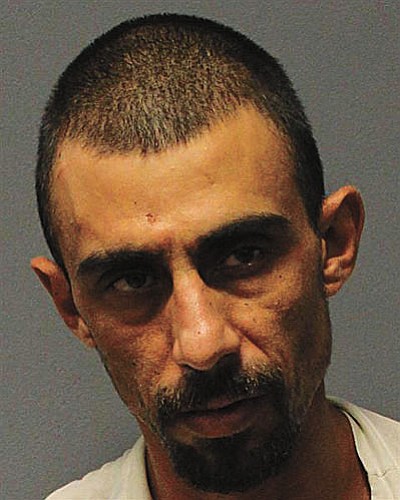 The Verde Valley SWAT team was brought in on a report that Felix held his wife and two small children hostage in their house in Centerville and had fired a sawed-off shotgun toward the woman as she fled.

Clarkdale Police Chief Randy Taylor said police were eventually able to negotiate with Felix for the release of the children but the man stopped communicating with police and barricaded himself inside with his dog and the SWAT team was able to extract the man.

Clarkdale Police initially charged Felix with 10 counts, mainly felonies, but a grand jury indicted Felix on only four of the counts initially: discharging a firearm within town limits, two counts of drug paraphernalia and assault with the reckless intent to injure to which he pleaded not guilty.

Felix also pleaded 'not guilty' to a separate indictment charging with two counts of possession of a deadly weapon by a prohibited possessor, two shotguns, one sawed-off.

Felix's wife and a child were in court for the arraignment and asked for a modification of the no-contact restriction.

The woman said the incident was "way out of proportion," but Judge Micheal Bluff limited her comments to the request, not the case itself. She said she would like to have to have mail communication with Felix for herself and daughters.

The deputy county attorney, Mike Morrison, however, opposed the relaxation of no-contact restrictions. He said, he objects to the modification for "the real danger and any contact could allow."

The prosecutor said the subject held his family hostage for seven hours and also fired a shotgun at her. Judge Bluff agreed to not rule immediately, but to take the matter "under advisement."