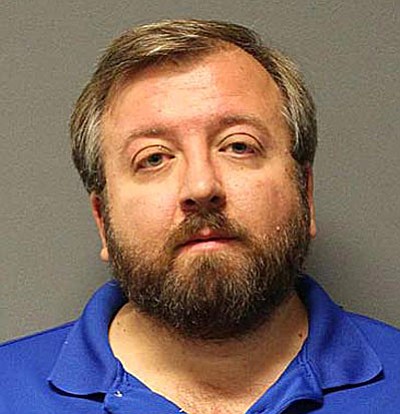 A Sheriff's Office detective received reports Aug. 5 from the girls' father of "inappropriate sexual texts" his daughter had received from Griffin, according to Yavapai County Sheriff's Office spokesman Dwight D'Evelyn.

"The detective examined the victim's cell phone and confirmed several messages from suspect Griffin explaining a need for sexual contact with the 12-year-old," D'Evelyn said.

He said Griffin had previously arranged for a second girl, who is a family friend, and the victim to spend time together.

After gaining consent of the victim's father, the detective posed as the victim and continued texting Griffin.

"In the messages, Griffin again suggested they could have sex as the best way to gain 'energy' while he helped her along the 'path,'" D'Evelyn said.

Griffin agreed to meet the victim in the Cornville area and, during the course of the text messages, disclosed sex acts within the last year with the second girl, who was under age 14 at the time.

"Griffin now suggested that the both girls could meet with him and, 'They could all try sex together,'" D'Evelyn said.

The suspect agreed to meet the victim Aug. 9 and outlined specific sex acts, D'Evelyn said. Griffin also shared photos of a girl's genitalia and claimed they were of the second girl.

On August 9, 2015, Griffin arrived at a designated location in McGuireville, intending to meet the 12-year-old victim.

"Instead, Griffin met with YCSO deputies who placed him in custody," D'Evelyn said.

D'Evelyn said Sheriff Scott Mascher set a priority for the Sheriff's Office to catch child predators through special operations that involve enticing predators out of the shadows into custody.

"These operations range from Internet luring investigations to multi-agency efforts that draw predators answering internet ads desiring to meet 'children' for sex," D'Evelyn said, adding that most cases result in arrest before a suspect can harm or continue to harm a child.

The Sheriff's Office also works with with the Internet Crimes Against Children taskforce, funded by the U.S. Department of Justice, which provides support and technology to investigators whose goal is to find and save unreported or unknown victims of sexual abuse.

"Many citizens often believe these stings are not essential and basically trying to catch men who would otherwise not break the law," D'Evelyn said. He said incidents like Griffin's arrest show the real reasons detectives set up sting operations.