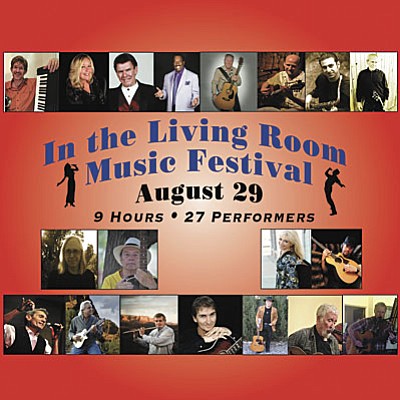 CPL Sedona and producer Shondra Jepperson have announced the first all-day "In the Living Room Music Festival" Saturday, Aug. 29, featuring 27 local performers on stage at the Center for Positive Living in the Village of Oak Creek.

According to Jepperson, these 27 entertainers represent some of the most popular performers in Sedona and the Verde Valley and are coming together to gift their time and talents for this daylong fundraiser for the Living Room.

The "In the Living Room Music Series" started in October 2013 at CPL's home in the Village of Oak Creek and has showcased over 40 artists on Wednesday evenings sharing their music talents in a casual "living room" atmosphere. Many of these artists are participating in the festival.

Shondra Jepperson, founder of the In the Living Room Music Series and music director of CPL Sedona commented, "We have an amazing line up of some of the best artists who have graced our stage and we're really mixing it up genre-wise from country, rock, cabaret, New Age to singer -songwriters and jazz. If you're a music lover, this is a must go to event."

Singer-songwriter Gary Simpkins, who hosts his own open mic program in Camp Verde every Monday evening is co-producing this music festival alongside Jepperson.

The foyer of the Center for Positive Living will be offering concessions for sale and a raffle to win a gift basket which will include CDs from the artists in the festival, gift certificates, and services donated from local businesses.

In addition, a few vendors will also be in the foyer selling jewelry and offering services.

With its recent expansion, the Center for Positive Living Sedona, located at 45 Castle Rock Road in the Village of Oak Creek, is an intimate space and is now able to seat up to 50 people. Tickets for each 45-minute concert set are available online at www.cplsedona.org and at the door during the festival.