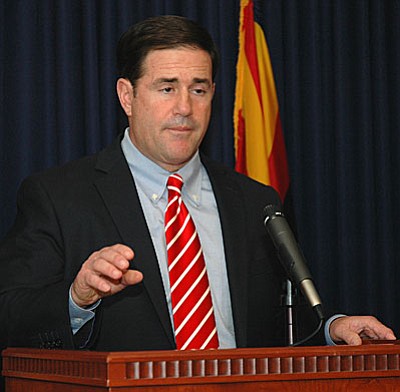 Gov. Doug Ducey details Wednesday how Arizona will cancel its contract with the operator of a private prison following a riot there. But the governor rejected questions of whether the Department of Corrections is at fault for failing to properly monitor the facility and anticipate the problems. (Capitol Media Services photo by Howard Fischer)

PHOENIX -- Gov. Doug Ducey on Wednesday cancelled the contract with a private company which has been operating a prison for the state where inmates rioted last month and left much of it "uninhabitable.'

"What happened at Kingman was frightening, disturbing and completely unacceptable,' the governor said at a news conference. He said Management and Training Corp. will be required to surrender the facility and the nine years remaining on its contract to another private company.

Ducey also said the company will be required to make repairs at its own expense following several days of disturbances which resulted in more than 1,200 inmates having to be moved elsewhere.

The study also said MTC failed to conduct "critical staff training' as required with its contract with the state and withheld that information from the state agency. It also says the company's failure to promptly and effectively quell the riots "allowed the inmate rampage and property destruction to continue for many more hours.'

And the report points out that inmates targeted company property for destruction rather than their own personal property as well as an absence of inmate-on-inmate violence.

"(That) strongly suggests the riots were more likely precipitated by inmate dissatisfaction with MTC's operation of the prison than by anger among the inmates themselves,' the report states.

Potentially most significant, the report says that more than one third of the deficiencies found were the same the Department of Corrections cited the facility for following the escape five years ago of three inmates, an incident that resulted in the deaths of two people.

But Ducey repeatedly said that nothing that happened at Kingman can be blamed on his agency which is legally charged with monitoring privately run prisons where the state has put inmates.

"When we're not getting information from the private prison operator, when they are not telling our monitors what's happening, and they're actually being by their company to not be forthright with the Department of Corrections, it made it very difficult for them to do their jobs,' the governor said.

And what of the faults found five years ago -- and again now?

"This is a different situation that happened,' Ducey responded.

In a prepared statement, MTC spokesman Issa Arnita said the Kingman facility has had "overwhelming positive audits' from the Department of Corrections in the last five years.

He did say that MTC "takes full responsibility for the disturbances' which he said started with a confrontation with two inmates "led to a chain reaction' staffers could not prevent. And Arnita said the incident spread to the "the failure of effective communication by the command structure.'

But Arnita said the situation was not helped when the Department of Corrections took control and began issuing orders without communicating to MTC incident commanders.

"This caused major confusion with staff which may have impeded our ability to properly manage and minimize the subsequent disturbance,' he wrote.

Ducey, however, brushed aside repeated questions about the culpability of his state agency.

"The issue here today is MTC,' he said. "And it is their failure.'

But Arnita said his company won't challenge the contract cancellation, saying "it's not in MTC's nature to do that.'

The governor also made it clear he is not giving up on the idea of private prisons or even cancelling MTC's contract for a 500-bed minimum security facility in Marana. Instead, Ducey said the Department of Corrections will be conducting a thorough review of that facility and four others run by two other private companies in Florence, Red Rock and Phoenix.

Nor is Ducey cancelling plans to contract out for another 1,000 private prison beds next month.

"The reality is we do have people out that are committing crimes,' he said.

"My obligation is to keep our citizens safe,' the governor continued. "And we're going to need beds as to where we can put these people away.'

He said 29 other states also use private prisons, calling it "the least bad alternative' given the state's finances.

In essence, companies agree to build and operate a prison for the state in exchange for contracts guaranteeing a certain number of inmates over a 20-year period. At the end of the time, the state owns the facility.

That means lower up-front costs for the state. But the private companies build into their bids not only their operating costs but also reimbursement for construction as well as a profit.

"You're all very aware of our budget situation in the state of Arizona and the stresses that we have financially,' Ducey told reporters. "This is the most effective way for us to provide public safety to the public in a financially responsible way.'

Sen. Martin Quezada, D-Phoenix, the ranking minority member of the Senate Judiciary Committee, said Ducey was right to cancel the contract for Kingman. But he said that doesn't go far enough.

"The Department of Corrections has always assured the Legislature that they maintain strict oversight of private prisons, yet now claim ignorance of the many failures detailed in their investigation,' he said in a prepared statement. "They can't have it both ways.'