Appeals Court: Cottonwood had no negligence in 2010 airshow balloon crash 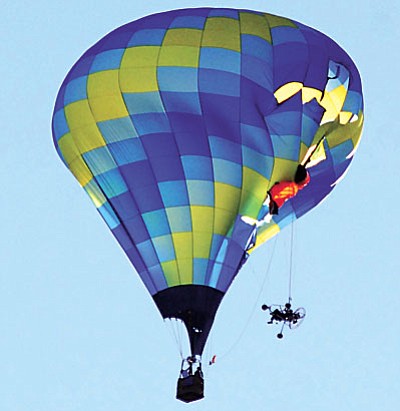 Tuesday, the Arizona Court of Appeals upheld the trial court decision in Yavapai County, clearing the city of negligence in the 2010 mid-air crash of a powered paraglider and a hot air balloon. VVN file photo by Jon Pelletier

PHOENIX -- It will have been five years in October since the City of Cottonwood held Airfest 2010, a local airshow, staffed by volunteers in which aircraft operations were invited to participate.

The show was a huge success, but the lawsuit that resulted from a mid-air crash has scuttled the future of the show and has kept the city and others in court ever since.

Tuesday, the Arizona Court of Appeals upheld the trial court decision in Yavapai County, clearing the city of negligence in the mid-air crash of a powered paraglider and a hot air balloon.

The paraglider was operated by Kenneth Ritchie of Cornville and a hot air balloon, piloted by a dentist Pell Wadleigh of Page.

Cottonwood City Manager Doug Bartosh estimates attorney costs and damages from the lawsuits must have run into the 7-digits for all parties.

He said the city is owed about $30,000 in costs by Ritchie, who was found responsible for motoring into the airspace of the balloon.

The small craft became entangled in the guywires of the balloon and tore into its fabric. Both craft tumbled into fence and then a parking lot, neighboring the Cottonwood airstrip.

No one died, but Richie and John Biddulph, a passenger in the balloon were both injured.

Horton said the case was settled with balloon passengers John Biddulph, Susan Evans and Wadleigh in 2013 and January 2014. So, the remaining litigation was between Ritchie and the city defendants.

Judge Joe Butner of the Yavapai County Superior Court ordered the case dismissed Feb. 19 after honoring a cross-motion for summary judgment between the Kenneth Ritchie and the city defendants.

Ritchie had appealed a summary judgment in Yavapai Superior Court that in April 2014 found in favor of the City, as well as other entities and individuals.

Ritchie claimed that the lower court was wrong in deciding the City did not "owe a duty of care" to him after he was airborne and had the mid-air collision. Duty of care is a key principal in proving negligence.

The Appeals court agreed with the lower court that the city was responsible to maintain the airport, provide ingress and egress and warn of obstructions to take offs and landings. But the high court said, "A landowner's obligation to invitees (to the airshow) is not limitless. Once the invitee safely leaves the premises, the landowner-invitee relationship terminates, as does the landowner's duty to the invitee."

Cottonwood City Attorney, Steve Horton says, "The appeals court decision is tight and well-reasoned. Richie could attempt to take the case further, but I don't think it will change the outcome. You would need to point out an error in the courts reasoning, and I don't see it. They could file a petition for review with the Supreme Court, but I would be shocked if the court took up the case."

Cottonwood Manager Doug Bartosh agrees, "The Airshow was really popular, it would be nice to see the show return. Our Airport Commission relies on a lot of volunteers and when they became part of this lawsuit, they took a step back and said 'is it really worth it?'"

"Unfortunately, that is the downside of what was once a very nice event. An incident like this can ruin it."