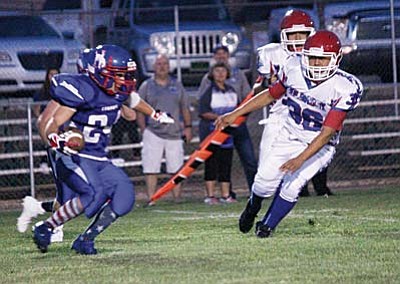 Camp Verde kick-returner Dakota Brueland returns a kick-off Friday night versus Holbrook. Brueland finished the night with 255 all-purpose yards for the Cowboys. He scored the only receving touchdown for the Cowboys on an 80-yard pass from Trevor Heyer. VVN photo by Greg Macafee.

CAMP VERDE - The Holbrook Roadrunners came out strong and fast, Friday night scoring three touchdowns before the eight-minute mark in the second quarter on their way to a 25-12 victory over the Camp Verde Cowboys.

Cade Maestas got the game going with a touchdown pass to senior Wazuri Waits to put the Roadrunners up 6-0 early.

Maestas tallied his second passing touchdown of the night at the end of the second quarter when he found Scottie Gishie in the end zone to put six more on the board for the visiting squad.

Head Coach Steve Darby believes that he might have re-injured an injury from earlier in the week.

"Mickey injured his Achilles in practice the other day, he said he was good to go tonight, I suspect he re-injured that same area," Darby said. "It doesn't sound like it's detached so hopefully it's something in two weeks he's back."

After Salas was helped off the field Camp Verde was forced to punt on that drive, and Maestas answered with his third passing touchdown of the first half, hooking up with sophomore Cole McDaniel on a 27-yard pass reception and an extra point that put the Roadrunners up 19-0 and would take the lead for good. Darby said the passing game of the Roadrunners was unexpected and by the time they made some adjustments it was too late.

"It was unexpected, we made some adjustments and we switched to a cover 2 and we were able to stop it but not before they were able to score three touchdowns and that put us in a hole we were never able to dig out of," Darby said.

The Cowboys went into the half down 19-0 but the second half was different for the Cowboys as it seemed like they were about to mount a comeback after Jaysen Leonard found the end zone on a 12-yard touchdown run that would put six points of the board for the Cowboys.

After the Roadrunners were stopped on the next drive, Dakota Brueland returned the punt 34 yards, and it seemed like the Cowboys were going to be threatening but a 4th down QB sneak by Trevor Heyer failed, and the Roadrunners took over on downs.

At the 11-minute mark, Maestas found the back of the end zone again, this time using his feet as he scampered in to put the Roadrunners up 25-6.

After Maestas scramble for a touchdown it looked like the Cowboys were fired up, as Trevor Heyer found Brueland for an 81-yard touchdown reception that would put the score at 25-12 with 10-minutes left to play. Almost a minute later Leonard picked off a deep pass by Maestas.

Heyer would answer Leonard's efforts on the next drive with a 24-yard pass completion to Brueland. Brueland suffered a big hit on the play and was checked out by paramedics after the game.

"Dakota took a big hit on a pass reception, and he was coughing up blood and having tightness of chest," Darby said. "I suspect he has a pulmonary contusion, but I have the paramedics checking him out just to be safe."

Heyer would find Bryce Wantland for a 12-yard pick-up, but that was it for the Cowboys as after an incomplete pass on 4th down. The Roadrunners would get the ball back and ran down the clock from there.

Heyer finished with 136 yards passing one touchdown and one interception on the night, after sophomore Peyton Sarkesian got the start under center for the Cowboys.

Sarkesian finished with seven completions on nine attempts for 45 yards according to Maxpreps.com. With the shuffle of quarterbacks the last two games, Darby has been riding whatever quarterback seems to be hot at the time, as both Sarkesian and Heyer have seen multiple snaps in both games under center.

"It seems that to this point one seems to be a little hotter than the other, and then that one has a misstep and we put the other one in and he does pretty good for a while," Darby said "I don't know if it is a competitive thing or they are just eager to get in there and improve themselves, but at this point we are going to try anything we can to win games."

It won't matter who is under center for the Cowboys if they don't have time to throw as both quarterbacks were pressured almost instantly all night.

Darby said they will be stressing blocking in practice as they head into their bye week. The Cowboys did have one bright spot on the line in junior Reyes Hererra, but Darby said one lineman isn't enough.

"Reyes Herrera did a phenomenal job tonight blocking he was a bright spot on the line," Darby said. "We just all need to be on the same page and block like Reyes right now one lineman doesn't cut it we need five,"

The Cowboys head into their bye week with hopes of correcting things before heading down to Globe on September 11.

Darby said he will be looking to stress how to block and tackle during their time off.

"If you do that well you win games, right now we don't do that very well," Darby said.

The Globe Tigers lost their first game of the season Friday night losing to St. Johns 14-6. The Tigers will host the Cowboys at 7 p.m. on September 11. The Cowboys will then return home on September 18 to face-off with Pinon.