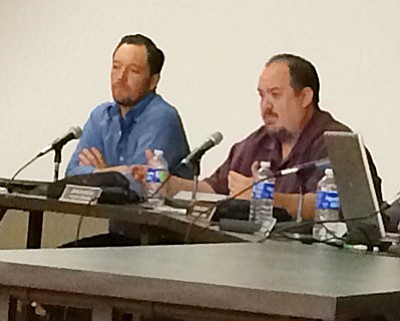 Councilman Jesse Dowling (center) suggested a hybrid by keeping Old Town the center of activities, but also to move concerts perhaps to Riverfront Park. To Dowling's right, Councilman Tim Elinski was the only vote in opposition to Thunder Valley Rally. (VVN/Jon Hutchinson)

COTTONWOOD -- When the Cottonwood City Council asked for more data to substantiate the continuation of Thunder Valley Rally, questions were asked of Old Town businesses as well as the entire mailing list of the Cottonwood Chamber of Commerce.

The response: 60- to 70 percent of the businesses said TVR should continue.

Tuesday night, up to 150 people, many dressed in leather, gathered at the Cottonwood Recreation Center to give their support or opposition. With a landslide of thumbs-up, the council eventually voted to give the flag to the biker event. A total of 24 people spoke.

Cottonwood's Cathy Sanders sid the area would lose out if bikers were kicked out. She said, "This is no longer the 1950s and we are not living on the back of a motorcycle like Mad Max." Like many others, she hailed bikers' support of charities like the Turkey Trot and Toy Run.

"Bikers are now many well-educated and probably pay more for a bike that most others make in a year," said Jodie Bird Delbert. "Our only crime is wearing leather and riding a motorcycle."

Local businesses and festival sponsors also addressed the Rally. Ari Levinson of Law Tigers brings a giant 18-wheeler every year to the show. He has continued to increase his sponsorship in the event each year.

But, Mike Kilpatrick of Olive Oil Traders told the council that the event is "devastating" to his Main Street business, with low sales numbers those days. He says he has to monitor smoking at his door and that people want to use his bathroom but don't buy.

Dennis Parks of Cottonwood Motor Sports admitted that his business "sucks" during the event, but he is able to set up appointments.

On the other hand, Christopher Robin, with Rebecca Riffle, said their Main Stage music venue had "one of the best weekends and we didn't have to throw out anyone."

Another businessman, Trevor Gottschalk of the Old Town Frame Shop, said it is "Unfortunate that the city has latched onto this event." He says the National Geographic tourism investment, Walkin' on Main and the Home Tour are more appropriate. "Why finance a party not respectful of Old Town?"

Kyle Rose of Grand Canyon Harley Davidson, was worried about the council review, "Are we going to have this discussion every year?" he wondered.

Two biker pastors were on hand to support the event as well. Pastor Joe Dugan of Dewey said he is one of Heavens Angels who works with the many in leather. The other is Pastor Larry Kimmel, who urged the city, "Don't take away the opportunity to talk to the bikers," he described it as his field mission.

Old Town Association President, Larry Cohen, said his antiques business didn't make much that weekend, but the exposure is great for the Old Town Association. The OTA made $12,500, which goes into cooperative advertising with the Arizona Tourism Council.

Councilman Randy Garrison, a member of the TVR planning committee has no problem with the event, but wants to make it "more prosperous. $63,000 is a loss to the city and Cottonwood, doesn't have a lot of money to bring in events. We can't get cooperation from other communities, Jerome, Clarkdale or Sedona doesn't want it. I don't think we can grow it in the two blocks. Now, Tilted Earth wants another $50,000."

Cottonwood Council opponent Tim Elinski said everyone has the right to a rally, but questioned if Cottonwood is the right place. "I have to balance the desires of constituents," he said. "TVR is our biggest event that demands the most staff time. The National Geographic Tourism is huge by comparison."

Councilman Jesse Dowling echoed Elinski's sentiment. "Pretty soon we are going to run out of room in Old Town."

Mayor Diane Joens, admits it is difficult because of the cost, "But we fund the Cottonwood Easter Egg Hunt, Daddy-daughter Date Night, Rhythm and Ribs and the Farmers Market."

Garrison suggested Riverfront Park for expansion of TVR. "I am not a fan of the Fairgrounds. It didn't work with Smoke Out West."

Dowling suggested that Cottonwood continue to have bikers in Old Town, but to have concerts at Riverfront Park or elsewhere

The mayor agreed, "I would like to split the venues, but we are too fragile now."

"If we split TVR we will lose it," said Richard Faust, Parks and Recreation Director.

Council Member Ruben Jauregui had the last word: "I am not comfortable with 20,000 in Old Town. I'm also worried about safety issues."

The council voted 6-1 to continue the rally; Tim Elinski voted against.