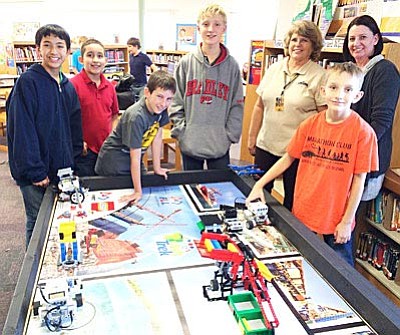 COTTONWOOD - While some kids at school are dunking basketballs into hoops, other kids are dunking parts into bins using robots that they programmed themselves.

By "combining the excitement of sport with the rigors of science and technology," FLL is encouraging elementary and middle school students to work as a team alongside an adult coach in order to solve a common problem.

FIRST -- which stands for For Inspiration and Recognition of Science and Technology -- is the non-profit that organizes the tournaments, while LEGO® is the toymaker that supplies the parts.

"We are funded through tax credits and business sponsors," said Teresa Rose, an MVP fifth grade teacher who coaches the students along with Fran Forester, an MVP seventh grade teacher.

The ten-member robotics teams -- two at MVP and one at CMS -- meet weekly as an after-school activity.

Using an FLL-supplied table, participating student robotics teams build stations using LEGO® blocks and program a robot to travel to each station and activate a function.

Students have six weeks to complete the project.

This year's theme is TRASH TREKS. The student's mission is to collect, sort and recycle trash.

A demonstration revealed a robot traveling to the first LEGO® block station; a trash composter. The robot pulled a handle, activating a 20-second process in which "trash" was converted into a single composted disc that was ejected for transport.

Other stops for the robot include a recycling station and a packaging station. The students have even engineered a solution to LEGO® blocks arriving in varying lengths by creating an automatic sizer and sorter.

In order for the robot to travel in a certain direction and complete a required action, computerized coding is required to be written by students, such as fifth-grader Mark Rutschow.

Anthony Rodriguez, fifth grade, has taken skills he learned from building LEGO®s at home and applied them to the school project. He says he joined the robotics team because "LEGO®s are really cool."

Student Jackie Moore said, "I like to build LEGO®s because it's fun. We get to work together and learn about teamwork."

The student's coach has also seen positive outcomes from her students as they pool their diverse talents into a single cohesive mission.

"They apply the skills they learned in science class, and learn cooperation and teamwork. Part of the contest is the value of competition, learning to be a good winner or loser,' she said.

"They also learn to test procedures and processes,' said Rose.

In fact, the students have taken the same concepts learned through TRASH TREKS and applied them towards a school-wide initiative at reducing waste.

Fifth grader Braden Reay says, "We are trying to not waste so much food. The students are helping by doing tasting tests of food to see which ones they like and by helping with menus. We even wrote a song about it."

Some 400,000 students attending grades K-12 are involved in FLL worldwide.