Life in the Slow Lane: "Let There Be Fire!" 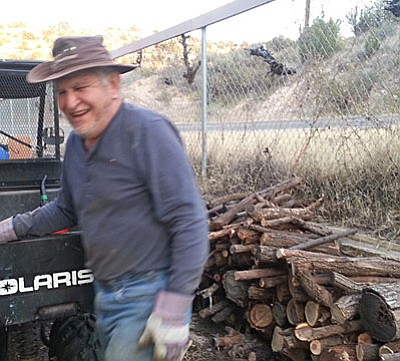 One of the best things about living the rural life are my neighbors. Not that I haven't had great neighbors in the past. My Scottsdale neighbors, Amy, Carol, Gary and Wendy, were wonderful. As I've mentioned before, the ex traveled a lot for work, most of it international so I was alone much of the time. Even though I rarely called on my neighbors for help, it was reassuring to know there were people looking out for me when I was alone. But I would never have asked any of my city neighbors to teach me how to work a chain saw, well, mostly because I never needed to work a chain saw when I lived in the city.

Well, I need one here. So yesterday, I asked my neighbor Al to show me how to work the saw. But, after he'd done that he wouldn't let me use it. Instead, he insisted on taking on the big wood pile for me. He claimed it's a thank you for helping them with their computer. For me chain saws=hard; computers=well, suffice it to say I built my first one in 1985 and have been going strong since. He took on the Not-So-Big wood pile on the upper half of the property. The Really-Big wood pile is on the central portion of the property, toward the back, where a hundred years (I might be exaggerating here) worth of floods have driven massive logs up against the Cottonwoods.

A few years back we had a tree service thin the spindly overcrowded trees on the hillside above the ditch. Spindly is a relative term for this property. In this case, it means the Cottonwoods were only a one-and-a-half-person trees, i.e., if two people wrapped their arms around the trunk their hands would overlap on one side. Stunted because they grew too thickly beneath the Cottonwoods' canopy, the dozen or so Ash trees were only probably a foot in diameter, the half dozen Walnuts were a little smaller. The service dropped the largest logs--the Cottonwoods mostly--into the blackberries to compost. Much to my surprise, Cottonwoods turn out to be Oyster Mushroom fodder. They've since sprouted some really tasty Shrooms, which I can harvest should I wish to risk my skin. I usually don't go too far into the brambles, but the mushrooms don't go to waste. The turkeys love them and the blackberry thorns don't seem to bother them.

Most of the smaller logs got piled up at the edge of the path that allows access to the upper half of the property. The pile's been there now for two years, neatly stacked, as tall as I am and three times as long. That's a lot of wood just sitting there drying out and NOT sprouting tasty mushrooms. What else is there to do with it except burn it?

Being a conscious consumer (most of the time) I checked. It turns out that burning wood you harvest from your own land is considered Carbon-neutral. That's a nice perq for someone who loves the look and smell of a fire. Even better, this house has a fireplace fitted out with a blower, so the heat is channeled back into the room instead of up the chimney. Reassured, I went down with a wheelbarrow to bring up a few logs only to discover that most of what's in the pile is about five feet long, much too long for my hearth. Funny, the logs looked a lot smaller against the backdrop of the barren sandstone/limestone/conglomerate hillside.

That left me no choice. I was going to have to figure out how to use the chain saw. That meant calling on my neighbor Al. It turns out there were more things to know than I thought, like which cap is the oil and which is the gas, and how to tighten the chain. And that no matter how hard you try, you're going to spill said oil and gas while filling the tanks.

By the time Al got through showing me all that, he had decided he wanted to cut the wood for me. There was no dissuading him. He made it look easy. Wood chips flew, the saw buzzed and in a few hours there was neat pile of wood just outside my laundry room door. Because the service also added the smaller branches to this pile of "short" logs, there's plenty of kindling. I'm using old tax records beneath the kindling to start the fire. That may not be Carbon-neutral, but I don't care. It makes my heart happy to watch my past be consumed by a beautiful flickering fire that's warming the home and life I love more each day.