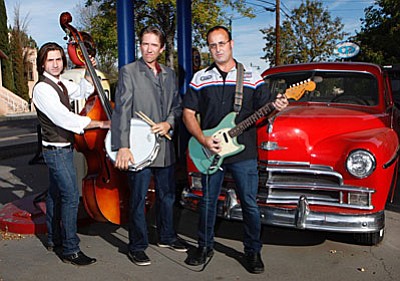 Randy J and the Tarantulas

Busbea moved to Sedona in 2014 and is becoming one of the area's favorite entertainers performing rock and country classics and originals.

Busbea has been playing guitar since he joined the Air Force in 1977, and his first performance was in Egypt while serving for the American Embassy in Cairo. Rick Busbea performs at Vino Di Sedona on the second and fourth Wednesday of every month.

Steve Estes takes the stage Thursday, Dec. 10, 6-9 p.m. Estes is an accomplished musician whose vocal and guitar styling covers a diverse range of genres from jazz to classic rock to blues to bluegrass and country; or as Estes puts it "Roots to Rock, Marley to Merle."

Estes is always sure to entertain and interact with his audience, as well as wow them with his expertise on his 12-string guitar.

Randy J founded the Tarantulas in 1995 in Florida. Today the Tarantulas are based in Sedona and members are Randy J; guitar and vocals, Gabriel Bass; bass, and Bill Juharos; drums. In addition to the Tarantulas, Bass is a singer/songwriter, and Juharos is a steel drum instructor playing a variety of world beat music.

The weekend continues with local favorites Paolo and Alex Ogburn on Saturday, Dec. 12.

Ogburn takes over for night-time entertainment, 7-10 p.m. Ogburn's music career has taken him from Alabama to Florida to Sedona.

In Birmingham, Ogburn began playing in pubs and restaurants at the age of 19. The years in Birmingham contribute to Ogburn's fiery and soulful Southern blues. Ogburn's show will include unique interpretations of a wide range of choice covers, and eclectic originals.

French is a Sedona native, and local realtor, as well as a singer-songwriter.

Every Tuesday, 6-10 p.m., Dan Rice hosts Open Mic, Rice is long time favorite musician in Sedona, and welcomes all music styles to perform at open mic. Both events offer a night of fun and music, musicians and audience members are welcome.