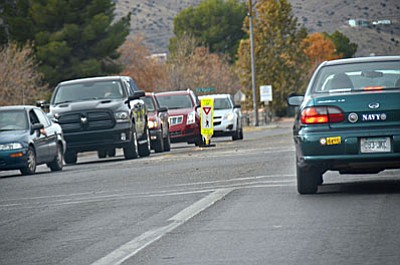 The planned improvements for Cottonwood's Mingus Avenue seem to address everything except the roadway's biggest problem: its intersection with 6th Street.

Granted, there is no easy solution to the daily traffic jam and stop-and-go pace of this intersection. It's a T-shaped crossroads. The dramatic drop-off entry into Annie's Restaurant is a major engineering challenge. It's a busy school-crossing zone. More than anything, it's just one of those problem areas where cramped quarters make change a challenging prospect.

Interestingly, it was just a few years ago that Cottonwood faced the same problem with the nearby intersection of Mingus Avenue and Willard Street. With morning and afternoon school traffic combined with the vehicle load of hospital commuters as well as having one of the largest churches in town nearby, Mingus and Willard was a near-constant backed-up stop-and-go quagmire. The solution of a roundabout wasn't popular at the time, but it sure has solved what was once one of the town's biggest traffic jams.

Yes, the availability of undeveloped land at Willard and Mingus made that project much more do-able than what exists at 6th and Mingus. But, it's a real head-scratcher to see the city investing so much time, money and energy to a new-and-improved Mingus Avenue without solving its biggest problem.

While on the subject of traffic jams, Cottonwood's leaders need to also think hard about the future of North Willard Street's T-styled intersection with Main Street at the entrance to Old Town.

Especially on busy weekend, but weekdays as well, entering Main Street in either direction from North Willard is a true exercise in patience. And with patience being the virtue with which many of us are challenged, this intersection is also an accident waiting to happen. With the prospect of the city's former recreation center becoming a brew pub and eatery, it's best the city address this problem now as it's only going to get worse as Old Town's reputation as a choice destination grows.

Letter: Real problem is intersection of Mingus and 6th Street
Editorial: Roundabout the perfect solution to Mingus-Willard traffic quagmire
Construction alert for Mingus-Willard intersection
Cottonwood moves ahead on Willard-Mingus roundabout
Letter: City remains out of touch with reality of our community