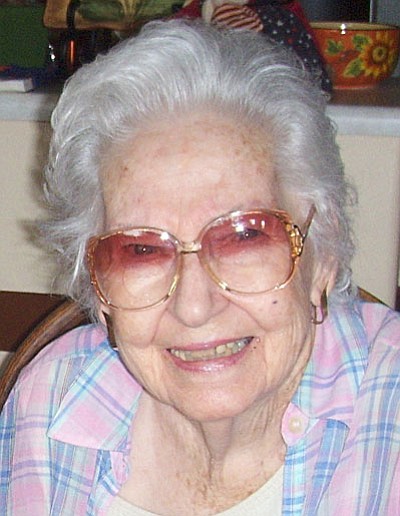 Jean Victoria Price passed peacefully from this life into the arms of our Heavenly Father at home in Cottonwood, AZ in the early morning hours of December 11, 2015 at the age of 97.

Jean was born on November 8, 1918 in Stratford, Ontario, Canada as the only child of Mabel and David Scott. Her father was the Assistant Fire Chief and her mother a homemaker.

She worked at the Stratford City Hall after graduating high school and had many happy memories of working there. She told many wonderful stories of attending events hosting soldiers who came to Stratford from other countries during World War 2.

She married Kenneth MacKenzie and had one daughter. In 1952 she followed her parents to California and resided in Huntington Park.

In 1959 she married the love of her life, Thurba Francis "Frank" Price and relocated to Downey, CA. In 1978 they designed and built a beautiful home in Santa Ynez, CA, but their time together there was short-lived as Frank unexpectedly preceded her in death a short three months after their move.

In 1998, at the age of 80, Jean and her cousin, Margaret Taylor, bought homes next door to one another in Cottonwood, AZ. Margaret was born in the house next door to her in Stratford in 1919, so it was a fitting end for their final years. They were known in the neighborhood as "The Cousins" and were so much fun to be around.

Jean was an accomplished artist and loved knitting, reading, crossword puzzles and playing mahjong on the computer. Jean and Margaret were avid travelers and saw much of the world together, including a four week trip into the interior of China and walking the Great Wall.

Jean was a strong, witty, and very much loved woman who will be forever missed.

Services will be held at a later date.