Make a pledge to cut down on food waste in 2016 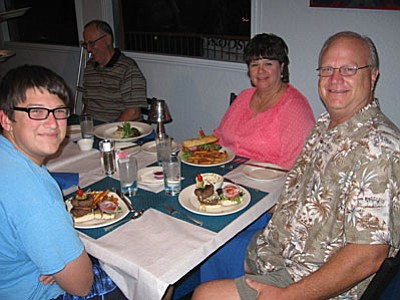 For instance, she suggested planning ahead when going on vacation by freezing foods that might become outdated i.e. freezing milk, fruit, and vegetables.

The quality of the food may be changed, but these foods are excellent in soups and stews. Another of her suggestions was starting a worm bin that can be sustained with many kitchen scraps and types of yard waste. The Dunnery decided the New Year was an excellent time to piggyback on her plea.

It has been proven that Americans waste 25-35 percent of their food budget through spoilage, throwing out leftovers, peeling and paring, then disposing of those parts of food that could be used in other recipes. According to a 2012 report from the Natural Resources Defense Council (NRDC), getting food "from farm to fork" consumes 10 percent of the total U.S. energy budget, uses 50 percent of U.S. land and claims 80 percent of its freshwater.

One in six Americans lack food security and we are disposing the equivalent of $165 billion in wasted food.

What about too-large portions at the restaurant -- it's either going to our waists or being wasted. A past Dunnery article suggested you bring your own take home containers.

There has been vast improvement in the last five years. David Dimler of the Dahl Restaurant Group and Christopher Dombrowski, Executive Chef of The Schoolhouse Restaurant agree that food, when prepared and portioned correctly, leaves little kitchen waste. Chris said customers usually limit their intake at 14-18 ounces.

Recycle City located in Phoenix, picks up and turns waste into compost, charging customers by the pound. (see The AZ Republic 12/7/2015 section 10A). David said if someone would organize such a business here and regularly pick up seven days a week, it would be worth a try.

Verde Earthworks is the main company in this area for collected and repurposing oil.

The EPA (Environmental Protection Agency) has announced a goal to cut food waste 50 percent by 2030. Let's do our part and work toward a sustainable and well-nourished nation.

1. Sedona Dine and Wine Fest's winter week found us at T. Carl's (Poco Diablo) for the Classic Level Dining. Jeff had crab cakes as an appetizer and an outstanding char grilled filet mignon. Suzie was really pleased with the Mussels Provencal and Pan Seared Salmon. We took home a portion of our entrees as well as Key Lime Pie and NY Cheesecake with fresh berry compote.

2. Instead of a second Dine and Wine, we happily used the half off "gift to locals" coupon at The Schoolhouse Restaurant. Jeff ordered Seared Ahi and Pork Osso Buco. Suzie selected the House Salad and Flatiron Steak. Everything was prepared, plated and served beautifully.

3. Chef Moscoto and his staff at The Hilton at Bell Rock outdid themselves for its members' open house at the Eforea Spa and Hilton Athletic Club. Stunning individual glassware was used to serve veggies and dip. There was a variety of other delicious pick-up appetizers to go along with flutes of champagne.