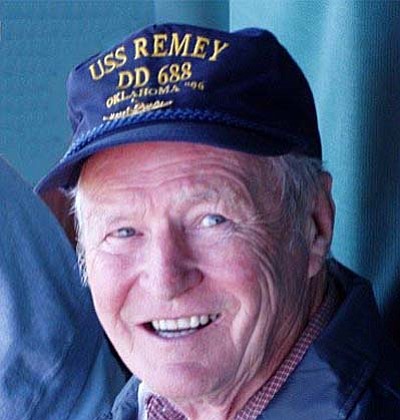 Born on June 3, 1925, in Plainfield, NJ, Joe grew up in the hardscrabble neighborhoods of Brooklyn.

He entered the US Navy in 1943 and was most proud of his ships, the USS Remey DD-688's, participation in the WWII Battle of Surigao Strait as part of the wider effort at Leyte Gulf, the largest ever naval engagement in world history.

At Surigao Strait, Joe's destroyer was credited with the sinking of the Japanese battleship Fuso.

He also participated in the campaigns in the Marshalls, Marianas, Palau, Iwo Jima, Okinawa and the Kurile Islands.

Once the war was over, Joe attended Missouri's School of Mines, and put his Engineering degree to use first in Ohio & New York before moving his wife, Helen Doris Beatty (Morris) and children to Arizona in 1960.

As a Professional Civil Engineer, Joe worked in Phoenix, Scottsdale & Mesa, before moving to Sedona in 1981 and started his own engineering & surveying company, BT Engineering & Consulting.

Joe moved to Cottonwood along with his second wife, M. Louise (Miles) Beatty in 2010. Although retired in 2014, Joe proudly continued to share his WWII experiences with school children and at other local gatherings to ensure his small part of American history would not be forgotten.

Joe is survived by his wife, Louise, his three children, Thomas J (Laurie) Beatty, Jeanne E (Kurt) Johnson and Janice A (George) Lay, five grandchildren and six great grandchildren to whom he generously shared his time and talents.

A Celebration of Life will be held on Sunday, December 27, 2015, at 12:30 PM at the Cottonwood Village, 201 East Mingus Avenue, Cottonwood, AZ, and lunch will be provided.

Friends and relatives are invited to send donations in his memory to the Wounded Warrior Project, P.O. Box 758517, Topeka, Kansas 66675; www.woundedwariorproject.org; 855.GIVE.WWP, or the charitable organization of their choice. We will dearly miss our beloved father.