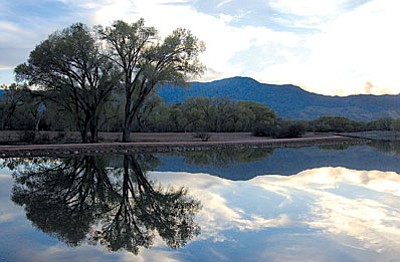 Participants in the First Day Hike at the Dead Horse State Park in Cottonwood will hike along the park’s lagoons, where there are frequent sightings of water fowl.

PRESCOTT - With the Verde River meandering through it, and ducks, bald eagles, raptors and hawks calling it home, the Dead Horse Ranch State Park could be the perfect spot for a "fresh" start to 2016.

The Cottonwood-area park is just one of 18 state parks in Arizona to participate in the Jan. 1 First Day Hikes - a program that encourages getting off to an active start in the new year.

"It's a way to get people out into the outdoors and recreating in our state parks," George Christianson, the park manager of Dead Horse, said recently. He added that the program provides a way to enjoy "the natural environment that we're so lucky to have."

The Dead Horse hike will lead participants around the park's three lagoons, and along the Verde River. Although there are no guarantees, Christianson said past hikers have spotted a wide variety of birds, including bald eagles and hawks.

A news release from Arizona State Parks pointed out that hikers would also be on the lookout for beaver, otter, and a variety of water fowl.

Attendees should wear weather-appropriate clothes, sturdy shoes, a hat, and sunscreen, and should bring plenty of water. A camera and binoculars are also suggested.

The hike, which will begin at 9 a.m., Jan. 1, in the West Lagoon parking lot, will last about one-and-a-half to two hours.

Christianson said participation depends largely on the weather, and typically brings out anywhere from five to 15 people. Last year, the Verde Valley experienced a New Year's storm, Christianson said, and hikers were "trudging through snow" on the First Day Hike.

A volunteer who leads hikes at Dead Horse throughout the year will be leading the First Day Hike, Christianson said.

Dead Horse has a $7 entry fee, which will apply to people participating in the First Day Hike.

Red Rock State Park in Sedona also will be participating in the Jan. 1 hike, and Park Manager Heidi Erickson says the guided hike would focus on nature, history, ecology, and geology.

She pointed out that participants will get a good view of the House of Apache Fires - a house with a rich local history. "From almost anywhere in the park, you can see it," Erickson said of the house built in 1947 by TWA president Jack Frye and his wife Helen. "The architecture is very beautiful."

Glenn Schlottman, chief of marketing for Arizona State Parks, noted that all 50 states participate in the First Day Hikes - a program that has been underway for about 25 years.

"The whole premise (of the First Day Hike program) is starting the year off right; on a healthy start," Schlottman said.