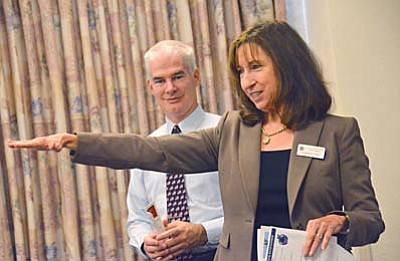 COTTONWOOD - The year ahead looks promising for local school districts as they enter 2016 with additional funding.

And the year ahead could become even brighter for Arizona schools.

On May 17, a special election will be held seeking voter approval of Proposition 123, which seeks to correct past shortages in school funding by tapping state land trust funds (60 percent) and the general fund (40 percent).

The governor's action settled a school coalition lawsuit by increasing funding an additional $173 per pupil (28 percent less than a previous court ruling).

The suit stems from a sales tax increase in 2000 in which voters approved a school funding formula tied to inflationary increases.

When lawmakers discontinued inflation adjustments in 2009, school districts and charter schools brought suit in 2010 to restore the lost funding.

Aside from addressing funding issues, local school districts will also be carrying out facility, operations and instructional strategies for 2016.

Here's a glimpse of what to expect:

The well-oiled CJSD administration, which until January was under the 13-year guidance of Superintendent Kathleen Fleenor, hopes to continue making big strides with little fanfare in 2016.

Since 2000, the population of Clarkdale has grown by nearly one-third, according to U.S. Census bureau data.

And with new housing construction expected to accommodate an additional 1,000 residents, "the Governing Board and staff will continue planning for student growth in the district," said Fleenor.

"The district will also continue to work on instructional planning and finalization of the AdvancEd Certification," she said.

As with other Arizona school districts, CJSD will also need to find ways to meet its financial obligations, despite state cuts in capital ("brick and mortar") funding over the last seven years.

"Legislative cuts in past years have reduced to an unacceptable low of capital funding for textbooks, classroom equipment and other items necessary for education," said Fleenor.

She gave an example of how CJSD plans to deal with an ongoing water issue.

"Funding from the Arizona Schools Facilities Board (ASFB) will pay for replacing some of the old water lines on the school grounds, in addition to funding a new drain pipe on the back playground where water forms large pools during rains," Fleenor said.

As Fleenor hands over the reins to Principal Scott Jacobson as the incoming CJSD superintendent, his background in science (he earned a biology degree from the University of Wyoming and worked in IT) could be key to implementing efficiencies in the upcoming year.

For example, although overall performance data are available from the Arizona Department of Education, Jacobson likes to see individual student scores tracked in an ongoing database to help target specific areas for improvement. That way, student needs can be identified and school outcomes guided on a year-to-year basis.

And while CJSD historically earns a "B" grade from the Arizona Department of Education, Jacobson's goal is to raise that to an "A."

With its plea for help with "Buses, buildings and books" answered, MUHSD can rise above last year's reality of "Bondo®, busted bricks and broken binders."

"We plan to have a great year in 2016," said Dr. Paul Tighe, MUHSD superintendent.

"In the spring and into the summer, students and staff will start to see the impact of the recently approved bond election," he said.

"We will have new buses and we will start addressing some of the facility needs, specifically with classroom furnishings and flooring," said Tighe.

Even as he deals with long-standing facilities, maintenance and operation deficits, Tighe also faces recent changes in how the state assesses student outcomes.

"We will continue to learn more about the state's new assessment, AzMERIT and we hope to obtain more detailed data to help drive instruction and monitor student growth," he said.

Tighe tempers his optimism for the year ahead with the realities of Arizona education in 2016.

"Even if Proposition 123 passes in May, Arizona will still be at the bottom ranking of the states in educational funding. The funding lawsuit settlement will help immensely, but it only brings us close to where we were in 2008," said Tighe.

"My hope is that we can continue to build on the successes achieved such that students continue to earn higher levels of scholarships, we continue to be ranked among the top high schools in the nation by US News and World Report and our great faculty and staff continue to do wonderful things with our students," he said.

Next week: A look ahead at Cottonwood-Oak Creek School District (COCSD).