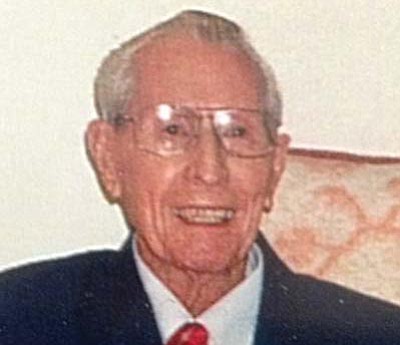 Robert Edward Parsons, 95 of Peoria, formerly of Rimrock and Sedona, passed away on January 27, 2015 in Phoenix. He was born on September 19, 1919 in PowellsVille, Ohio to Charles and Ida Parsons. God saw that he was getting tired and a cure was not to be, So He put his arms around him and whispered "Come with me." With tearful eyes we watched him suffer, and saw him fade away. Although we loved him dearly, we could not make him stay. A Golden Heart stopped beating, hard working hands at rest. God broke our hearts to prove to us, He only takes the best. - The Best by Author Unknown.

Robert Edward was special to all his family and will be deeply missed.

Robert worked as an aluminum tool and die machinist and for the MVD for the State of Arizona. He served his country in the Navy and served on the USS Wyoming and as a special Navy request attended hospital school.

Robert's life is a story of many adventures. Our father loved all his family and enjoyed many special friendships. He loved to golf and won the first best ball tournament at Sedona Golf & Country Club. He was a basketball All Star at Minford High School and music was always a special part of his life. He wrote and recorded a song for Jack Nicklaus. His specialty was country and western. He loved to travel to gamble at casinos and was very lucky at playing the machines.

Oh my how he loved to talk! His stories come from a life long lived. One of my favorites is "Hoover Steak"!! We have many special memories of Robert Edward. His wife Geneva would many times say "Eddie let me talk now." He was fun to listen too. We all will miss Robert Edward.

Donations may be made in Robert's name to Serenity Hospices in Phoenix, www.serenityhospiceaz.com or 4122 N. 17th St. Phoenix, AZ 85016.