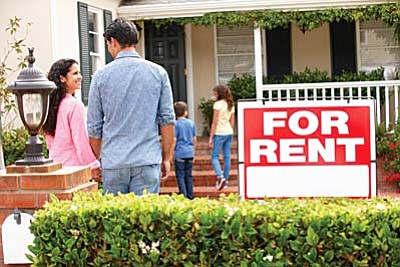 The legislation bars communities from imposing a new rental tax. Those that now have them would be required to cut the rate by 25 percent at the end of this year and each consecutive year until the levy goes away.

PHOENIX -- State lawmakers took the first steps Monday to strip cities of their ability to tax rents on homes and apartments.

The 5-4 vote by the House Committee on Ways and Means came after proponents said the levy is unfair to the one third of Arizonans who rent. Rep. Darin Mitchell, R-Litchfield Park, sponsor of the measure, said this hits the poor who are renting because they can't afford to buy a home.

But Rep. Andrew Sherwood, D-Tempe, pointed out that the tax is legally the responsibility of the landlord. More to the point, there is nothing in HB 2254 that requires the landlords to pass on any savings to their tenants.

Monday's vote came over the objections of several mayors who said the loss of revenues would cause financial problems. Overall, the League of Arizona Cities and Towns figures the legislation when fully implemented would reduce tax revenues by more than $87 million.

The legislation bars communities from imposing a new rental tax. Those that now have them would be required to cut the rate by 25 percent at the end of this year and each consecutive year until the levy goes away.

Cities and towns could keep any taxes -- and even impose new ones -- on short-term rentals, defined as less than 30 consecutive days. That also preserves any levies on hotels and motels.

Mitchell said the tax "rubs me the wrong way.'

He said renters, on average, have just half the income of homeowners. Mitchell said his legislation would provide "real tax relief for Arizona citizens who need it the most.'

Courtney LeVinus, lobbyist for the Arizona Multihousing Association, said the levy amounts to double taxation. She said when landlords pay their property taxes for municipal services those already are passed on to the tenants.

Christian Price, mayor of Maricopa, said the legislation takes needed revenue from his community. Price said his city is largely a bedroom community for the Phoenix area and lacks the ability to raise the money elsewhere.

And he said that his police chief told him that renters do impose costs on the community.

LeVinus jumped on the assertion.

"It's actually a little offensive to say that because you rent your home, either by choice or out of necessity, that that means you have a higher propensity to commit crime,' she told lawmakers.

LeVinus said any data supporting that is based on the fact that some apartment complexes have a single street address, making the number of calls to that rental address not exactly representative.

The committee vote did not occur along party lines.

Rep. Michelle Ugenti, R-Scottsdale, said she could not back a ban on the taxes.

But Rep. Bruce Wheeler, D-Tucson, supported the measure, calling the tax "regressive.' Wheeler noted, though, that his home city does not impose the levy.