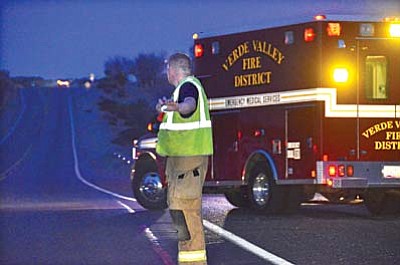 CORNVILLE - Yavapai County deputies were dispatched to Cornville Road near the Verde Santa Fe development about 6 p.m. Tuesday. A 51-year-old man reported he was assaulted and stabbed by a man who was still in the area. While EMS personnel treated the victim for injuries to his left arm, deputies eventually located the suspect about a mile away on a nearby forest service road.

Deputies discovered that the suspect, 41-year-old Nathaniel Stubbs, had a probation warrant issued by Maricopa County and was arrested. Deputies reported that the SUV he was driving, a 1998 Ford Explorer, had been stolen from his mother.

Deputies got specific details of the assault from the victim treated at the hospital. He told them that while he was preaching along the roadside at 89A and Cornville Road, Stubbs stopped in his Explorer to talk. Stubbs was obviously intoxicated and the victim encouraged him not to drive anymore and even offered to buy him food

The victim returned a short time later with food and found Stubbs parked in the area drinking more hard liquor. The victim convinced Stubbs to let him drive the Explorer to a roadway turnout where Stubbs could eat and sleep. As the victim was walking back to his motorhome parked nearby, Stubbs drove by in the Explorer and followed the victim briefly.

A few minutes later, Stubbs stopped at the victim's campsite. Stubbs began a confrontation, accusing the victim of stealing his phone and then tried to grab the man. The victim raised his hands to defend himself and was injured by a knife Stubbs was holding. Still, he was able to knock Stubbs to the ground and recover the knife.

He also took the keys to the Ford Explorer Stubbs was driving and flagged down a passerby to call the Sheriff's Office.

After treatment at a local hospital, Stubbs was booked at the Camp Verde Detention Center on his warrant and vehicle theft. Assault charges are pending a follow-up with the victim who initially declined to prosecute.

Stubbs was belligerent throughout the booking process. He remains in-custody on $4,500 bond.