It's that time of year again
Marauders baseball team gets ready for new season, looks for deep playoff run 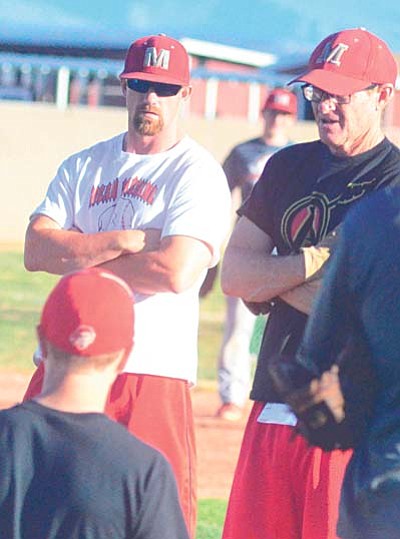 Head coach Bob Young talks to his team at practice on Tuesday. Young has been the baseball coach at Mingus on and off for about 20 years. VVN/Derek Evans

Mingus Union High School baseball has consistently been a successful program. It has by far produced the highest number of college athletes out of Mingus. It has won state champions. Its head coach won a college world series as a member of the 1981 Arizona State University baseball team.

And one player, Jeff Huson, played 12 seasons in the major leagues.

The team will start the season with two players already committed to play college baseball next year. Those are Orlando Machado at Glendale Community College and Tommy McCarty at Paradise Valley Community College.

Last year was a bit of a change for Mingus baseball. The team moved up from Division III to Division II. That stay will be short lived. The Marauders will play in Division II this season. But, next year will go back down to Division III.

"We did real well last year," Young said. "We moved up to Division II, went to state. I think we won 20 games. I thought we did well. We didn't know what to expect, since it was our first year in Division II."

He added this year's team is more inexperienced.

"This year, we're a lot younger," Young said. "So, we're going to have to work a lot harder and get a lot better if we want the same results as last year."

"We have good feeder programs," he said. "Little league is real strong. A lot of these kids play club ball. When they get up here, they do well. Steve Houston and John Behlow have been with me for over 20 years. We've had a lot of continuity there."

At all levels, baseball season is long. Teams often don't hit very well early in the season. Young said he expects that to be the case for his team this season.

"We're going to struggle early," he said. "We have a lot of young guys. We lost three of our top hitters. So, that's always the toughest thing to get some hitting."

He added the team's pitching should be solid.

"Orlando is our No. 1 guy coming back," Young said. "Zach Abrigo and Fernando Chavez are going to have to give us some innings."

Several of the Mingus baseball team also played football under Young. Some are Machado, Jordan Upham, Tristen Clark, among others.

Young has coached baseball at Mingus for about 20 years, but it hasn't all been consecutive. He left the program to coach softball for two years. He returned in 2009 and the Marauders won the state championship. He has also spent time as pitching coach. But, he has been back as head coach since 2009.

Young it just seems he can't leave the program.

"In a perfect world, I really don't want to be the head coach of two sports," he said. "It's just kind of been that in baseball, we'd find somebody that was the head coach. And then, I would gravitate to being an assistant. And then, the coach left. I want to be a part of the program. I don't necessarily want to be head coach. But, we just don't have anybody that's on campus who can take it over."

For the Marauders to do well this season, Machado will be a big reason why. He is one of the team's top hitters and pitchers. He primarily plays third base. And sometimes, he plays catcher.

Machado said he is ready for the season. This will be the third sport this year for Machado. He played football in the fall and soccer in the winter. But, he said he doesn't feel tired from the two sports.

"I actually feel that soccer got me more in shape," Machado said. "My base running seems pretty easy right now."

Although he already has a scholarship, Machado said he still has motivation for this year.

"Just to play baseball, really," Machado said. "Just play how I know how to play and not make too many mistakes."

Another important player for Mingus is McCarty. Like Machado, McCarty is excited for his last high school baseball season.

"Extremely," said McCarty, the team's starting shortstop. "It's my senior year. You need to go out there and give everything you have. I'm so excited for this year. Trying to prove a lot of people wrong. We haven't really made it far in the playoffs these past few years. I'm hoping to advance in the playoffs."

He added he thinks the team could have done better last year.

"We really just didn't execute," McCarty said. "We came out in a home playoff game against Gila Ridge and we kind of got smashed on. We just haven't been able to execute in any playoff game."

McCarty has been on the school's varsity baseball team since his freshman year. Mingus hasn't gone farther than the second round of the playoffs in any of his previous three years. His older brother, Shaun, was a member of the 2009 championship team.