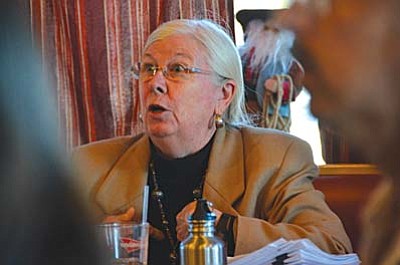 Resident Karen Daniels was at the meeting Tuesday, and talked about research studies she's submitted to the Federal Communications Commission that show negative effects of the type of radio waves cell towers transmit. She said sensitive receptors, or individuals with fragile immune systems like children, the sick and the elderly, are especially at risk. VVN/Vyto Starinskas<br /><br /><!-- 1upcrlf2 -->

CLARKDALE -- The 65-foot tall white balloon behind Nate's Cowboy Cafe on Tuesday gave residents their first picture of what living next to a cell tower looks like.

It was standing room only in the conference room at Nate's Cowboy Cafe, filled with residents concerned with having to sacrifice health and scenic beauty for network coverage.

Verizon Wireless wants to locate the tower at 1450 State Route 89A to address complaints they've received about a lack of coverage in the Verde Valley, said Thomas Waniewski, a principal at Capital Telecom. Unlike a similar tower in Cottonwood, this one will not be disguised to look like a pine tree.

Waniewski said his company planned the neighborhood meeting to try and address residents' concerns before the issue comes before council in the next couple of months.

"It's a lot easier to do through an informal process," he said.

Community outreach is one of the elements the planning commission and town council are going to consider when evaluating Verizon's application, Town Planner Beth Escobar said in an email.

Resident Karen Daniels was at the meeting Tuesday, and talked about research studies she's submitted to the Federal Communications Commission that show negative effects of the type of radio waves cell towers transmit.

She said sensitive receptors, or individuals with fragile immune systems like children, the sick and the elderly, are especially at risk.

"This area has a huge concentration of elderly residents and children," she said.

Attorney J. Gregory Lake spoke alongside Waniewski, stating that the federal government, the FCC, and his personal belief is that the type of signals cell towers emit are safe.

Waniewski said there is a limit set by the FCC on what levels are safe, and that the cell tower would emit about one tenth of one percent of that limit. This tower is one of three along the 89A that will work together to cover the entire area.

"It's not an additive, but it's not like you're close to the (FCC) threshold to start with," he said.

Phil Terbell said he owns the property and has paid taxes for years where Verizon will locate the cell tower. He told the assembled crowd that the Verde Valley needs the coverage.

"I'm a resident," he said. "I live in this neighborhood, I'm a Verizon subscriber, and I have one bar of cell phone signal at my house."

Current residents said the cell tower itself was an eyesore that would drive down property values, and discourage newcomers who might be drawn to the area's beauty.

Daniels said she and her husband spent seven years and about half a million dollars building their retirement home, an investment that was meant to see them through old age, but could soon see a decrease in value due to the cell tower.

"We spent everything we've got building that house," she said.

Waniewski said only an easement over Terbell's land would give another resident ownership of that view, and that one of the biggest challenges among home builders he represents in the Phoenix area is the lack of cell phone coverage when potential buyers try to make a call from a model home.

"This is going to provide much better coverage," he said.

One attendee said it was unethical to decrease property values just to improve cell coverage. Another was concerned for the safety of neighborhood kids, including his own, who play in the lot and might be able to access the cell tower.

Lake said the 40-by-80-foot compound housing the steel tower will be locked, alarmed and surrounded by a six-foot-tall fence.

"There's nothing inside the compound unless someone comes in with bolt cutters," he said.

Residents asked why the tower had to be built right in their neighborhood's line of site. Lake and Waniewski said other sites were scouted, but that the cell tower had to be located in an area zoned both commercial and industrial, and where it would best work in cooperation with other nearby cell towers.

An application by Verizon early would have located a cell tower near the downtown Clarkdale area, but that fizzled out last year.

Waniewski said this site is the best location to fill Verizon's gap in coverage.

"We're trying to put it together in a way that causes the least intrusion upon the community," he said.

Escobar said to locate the cell tower on a property zoned commercial, Verizon needs to obtain a conditional use permit from the town council.

She said conditional use application requirements include: A site plan; a copy of the National Environmental Policy Act report required by the FCC; the applicant's reasons the location is the best site; and a community outreach summary.

Clarkdale's planning commission is going to review the conditional use permit application during a March 17 public hearing being held at 4 p.m. in the Clark Memorial Clubhouse.

The planning commission could choose to table the discussion, Escobar said, and ask for application revisions or for more information. Members could also recommend the council deny, approve, or "approve with specific stipulations."

Clarkdale council members then get the application for review. If a member of the public protests the planning commission's recommendation in writing within 15 days of March 17 hearing, the council will hold a second public hearing, Escobar said.

The council decides if a cell tower is an appropriate use for the property, and grants or denies the conditional use permit. Escobar said the cell tower won't get FCC approval without first getting the town's zoning approval.