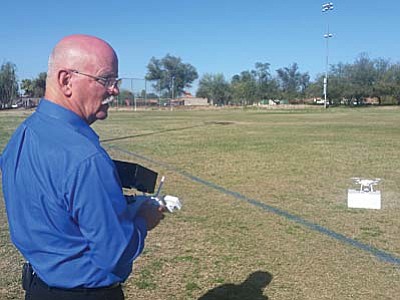 TUCSON - Fresh-cut grass and dirt swirl around a box as a small white craft slowly rises from it.

As it flies around a city park in Tucson, Doug Trudeau points out that he's the first person to obtain an exemption specifically for real-estate marketing from the Federal Aviation Administration to fly a drone.

Trudeau's unmanned aircraft has a camera mounted on it, so the real-estate agent can take aerial photos of the properties he's trying to sell.

Trudeau had seen homes in California and near Lake Michigan showcased by the technology, and he wanted to do the same.

He wanted to show a client's $1 million home, so he started practicing with a drone last year. But then concerns about FAA regulations made him stop.

He applied for the exemption, which he obtained in January after 177 days.

Trudeau, who works at Tierra Antigua Realty in Tucson, had one month of exclusivity. The FAA on Sunday issued draft guidelines for unmanned aircraft that could open the door for real-estate professionals to use the technology.

After the FAA finalizes the guidelines, it will be easier for anyone flying a drone under 55 pounds to receive a certificate, allowing them to use it for commercial purposes as long as they follow specific rules.

"Under current FAA guidelines, a Realtor could not use a drone to market a home unless they had a certificate of authorization," said James Arrowood, an attorney with Frutkin Law Firm in Scottsdale.

Arrowood said it could take all year before the rules become official.

John Karadsheh, a broker for Kor Properties in Mesa, used a drone to film a 5-acre property but stopped as regulations became more difficult to navigate.

"I've kind of backed off using them for now, but I would love to continue using them," Karadsheh said. "I would absolutely use more drones if it were legal."

Outside of potentially violating FAA regulations, users also must consider other issues. For example, if a pilot accidentally films a neighbor sunbathing nude, the operator could potentially face criminal and civil penalties, Arrowood said.

"People have a reasonable expectation of privacy, that's under Arizona state law," he said. "There is also civil liability for potential invasion of privacy. That's not to say (the neighbors) would win, but you could definitely get sued."

Trudeau said he informs neighbors when he uses his drone to avoid problems.

He said he tells them: "If you have privacy concerns, please let me know ahead of time, and I will address those before I go in the air."

Privacy and safety are Trudeau's primary concerns. Before launching his drone, he begins a pre-flight check to ensure everything is ready to go.

Trudeau flies it carefully and cautiously, making sure to stay clear of the trees 75 meters in front of him. The aircraft sounds similar to a swarm of bees.

Karadsheh agreed that safety is key.

"I've heard horror stories of (real-estate) agents who have gone out and spent a few thousand dollars on drones and have never flown them, or crashed them and wasted all that money," Karadsheh said. "I would suggest that you leave it to someone who knows how to operate it. It could be dangerous.

"You don't want it crashing into a powerline or somebody else's house."

Previous regulations only allowed commercial use of drones with very strict rules. The new FAA guidelines would allow for businesses to engage in drone activity under these conditions:

 The drone must weigh less than 55 pounds.

 The operator must fly it during daylight hours.

 The aircraft must stay within line-of-sight of the pilot.

 The operator must be certified and registered to fly the drone.
Report a Typo Contact
Sign up for our e-News Alerts
Most Read
7 days
30 days