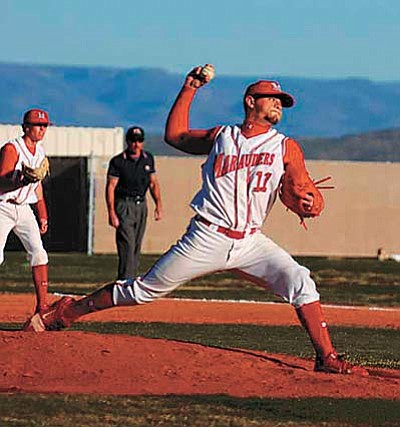 Since graduating high school, Tony Vocca has had a long journey. The 2009 Mingus Union graduate played both football and baseball at Mingus.

He then went on to play baseball at Yavapai College.

Then, Vocca played at the University of Utah in the Pac 12 and finished at Minnesota State Mankato.

Vocca recently played in a professional baseball league in Australia.

He was recommended for the league by scouts for the Detroit Tigers and Baltimore Orioles.

Vocca came back to Cottonwood about two weeks ago. He said he enjoyed the experience.

"I thought it was good for me," Vocca said. "It was a good experience. I'm glad I did it. It's something I can look back on and say I played baseball at high level in a different country."

He added he made some friends while he was there.

"It was one of the best experiences of my life," Vocca said. "I met a lot of good people there. I learned a lot of new things too. Not only baseball wise, but culture wise as well."

The name of Vocca's Australian team was the Adelaide Bite. He was mostly a pitcher, but also played some outfield. He also played with a club team while he was there.

He signed a contract with an independent team in the Frontier League which plays in Florence, Kentucky. The name of the team is the Florence Freedom. Spring Training for the team starts in late April.

Vocca added there were a few adjustments for him in Australia.

"I would say the biggest adjustment was probably not taking Australian baseball lightly," he said. "There are some Americans who would go over there and think Australian baseball isn't that good. A lot of the Australians in the league were affiliated baseball players with an MLB organization. So, that was something I had to adjust to."

The rules of the game were the same except for one. Every team had to have five Australians playing at all times.

"It's still the same baseball;" Vocca said. "Every rule is the same."

Some of the games Vocca played in were nationally televised on MLB Network. Those were the league's three games championship series. Vocca's team lost the series two games to one.

"We won the first game," he said. "We were losing 2-0 and then we hit three homeruns in one inning to take the lead."

He mentioned his team lost the second game in a close one and then was blown out in the third game.

But, Vocca added it was still a great experience.

"The day before the first game we got to the field and they were setting up all the cameras," Vocca said. "All of the banners were everywhere. It was something that I always wanted to do."

But, Vocca added he was able to keep focus.

"When I was pitching in the game, I was just in my zone," he said. "Just trying to get people out, but, it's something that I can tell my kids someday that I played on MLB Network. When I got home, a lot of people were talking to me about the game and just saying how cool it was to see me."

Someone who got to see him during the whole league was Brooke Knight, manager of the Adelaide Bite.

"He played a little for us in the outfield and did okay," Knight said. "I like him on the mound. He struggled a little bit at the plate. But, he also didn't get a lot of chances. He can swing the bat. It's just we had some Australian requirements. I like him on the mound, he has a lot of good velocity and he had a power slider. Also has a pretty good changeup. He gave us some needed help, which is great. It was nice to have him on the team."

Knight explained that it's not hard to Americans to feel welcomed in the Australian league.

"They tend to be pretty welcoming people," he said. "As long as you're embracing the culture, as much as they're willing to embrace you as a friend, then you're in great shape. If you go over there and think that you're American and you have it all figured out, it's not going to be so enjoyable for you. You still have throw strikes, hit the ball hard and put it in play. It's really the same game. "

He added he is sure some of the players probably still grew homesick.

"When you're young, I'm sure there's a little bit of homesickness that plays in," Knight said. "But overall, it can be a real privilege. To be able to travel overseas and play the sport of baseball at an elite level."

Knight said he thinks Vocca can have success with the Florence Freedom.

"I think Tony will do well," Knight said. "He can be a two-way guy. He can be a spot outfield player to start. Maybe work his way to an everyday spot in the outfield. And I think he has a chance to start as a pitcher. He hasn't thrown a lot, so there are still a lot of bullets in the gun. He just has to polish his secondary pitch command. Because there's enough stuff there. His slider does have some depth. And when it has location, it's pretty effective. He has a good fastball and he feels comfortable throwing over the plate."

Australian baseball for Vocca
Whatever Happened To... Jeff Huson
Booster Clubs provide financial punch for Mingus football, baseball programs
Over time Young has proven he is more than a coach
Jeff Huson: Sheer perseverance takes him to Majors