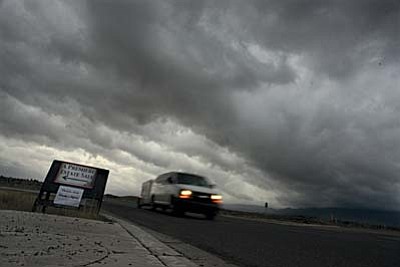 Ominous clouds hover over SR 260 early Saturday morning as a storm approaches the Verde Valley. The National Weather Service predicts a 90-percent chance of rain on Sunday, a 100 percent Monday and a 50 percent chance of showers on Tuesday. There is also a concern about flooding and severe winter conditions in higher elevations. VVN/Vyto Starinskas

NORTHERN ARIZONA -- There is more rain for the Verde Valley and snow in the mountains expected through Tuesday. A strong and moist Pacific winter storm began its move through Northern Arizona Friday and will continue to through at least mid-week.

The large and complex storm will bring significant rain and snow to Northern Arizona, according to the National Weather Service. As much as 24 inches of snow are forecast over the higher terrain of Northern Arizona through Monday. Heavy rain accumulations is also forecast along the south slopes of the Mogollon Rim and Bradshaw Mountains, where a threat for flooding will exist.

The track of this system will allow for good amount of Pacific moisture to be drawn into Arizona with 1 to 4 inches of rainfall is expected over the south slopes of the Mogollon Rim, Northern Gila and portions of Yavapai County.

Snowfall will remain at about 6,000 feet for the duration of the storm.

The National Weather Service advises motorists to take care on the roads. Traffic in the highlands will become hazardous because of the icy roads and low visibility.